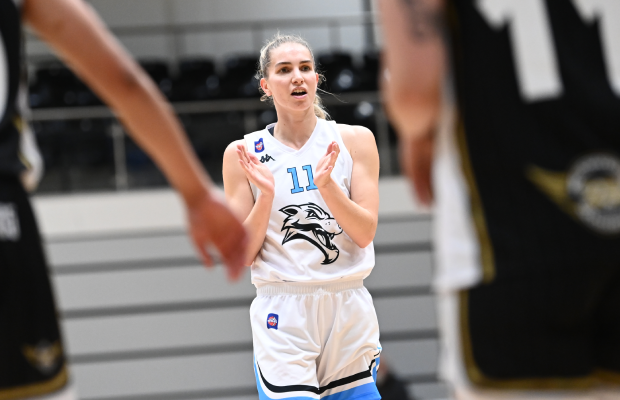 The regular season is underway with five teams starting their league campaigns with a win including this season’s newcomers.

Another clinical performance from the Lions as they opened their league campaign with a 54-point win in Scotland having travelled directly from Gran Canaria. Holly Winterburn top scored with 22 points along with six assists with back-court partner Kennedy Leonard finishing with 20-9-7 as minutes were spread through the roster.

Valentina Klocker and Leah McDerment, on league debut, made solid contributions from the bench as did Steph Umeh with a typically understated double-double in just 15 minutes of action. The Lions will face a sterner test for their home opener this Sunday as they welcome the Riders with a possible WBBL bow for Jo Leedham-Warner.

Cat Carr. Phenomenal. There were retirement rumours circulating in the post-season once again, but thankfully the two-time league MVP is back for an eighth season in the WBBL and still putting up insane numbers. Carr had 29 points, 17 rebounds and nine assists to lead the Suns to a 20-point Cup victory over Essex in what was a ‘dead-rubber’ with both teams eliminated.

Sevenoaks also had Renee Busch, Julia Koppl and Frankie Wurtz in double figures in a strong display having led by as many as 29 in the contest. The defending league champions open their campaign on the road this weekend as they take on Essex in a repeat fixture.

Another win, another near 100-point performance from the Hatters as they made a winning start to the regular season. Helen Naylor and Georgia Gayle both netted 20+ points, while Becca Cardenas handed out 11 assists with Sheffield looking strong already with numerous contributors throughout the roster.

Nyilah Jamison-Myers made an instant impact with a game-high 24 points in the win with compatriot and fellow new signing Ariona Gill getting onto the scoresheet late on having only arrived a few days prior. They face the Mystics again in the league on Saturday following their recent triumph in the Cup group phase.

Make that four wins from four in all competitions for the Riders. A winning start in the league was all that mattered, but they really had to grind it out to overcome the Wildcats. Hannah Robb was everywhere on the court and came up with crucial plays in a 15-11-4 night, while Anna Lappenkuper was calm and composed at the line to knock down a pair of decisive free throws in the dying seconds.

Oceana Hamilton was held to 2-of-11 shooting, but came up with four rejections in a low-scoring affair as the Riders defence kept their opponents to just 10 points in the fourth quarter. Their unbeaten start will be put to the test on Sunday as they travel to the capital to take on the high-flying Lions.

The first bump in the road for the Eagles as they dropped their home opener in the league to Oaklands off the back of successive victories to make the Cup semi-finals. Chris Bunten will be fearing the return of last season’s injury woes with Courtney Clasen and Marina Fernandez already on the sidelines.

One huge positive has been the performances of Ebony Horton with the former Mystics guard pouring in 26 points to lead the Eagles, who had closed to within a single point at the halfway point in the fourth. Newcastle visit Caledonia at the weekend as they look to get off the mark in the win column in league play.

Two defeats from two having been pitted against arguably the two strongest teams in the WBBL in the Cup. And, now the Rebels will do battle with the Suns and Lions again in their opening two games in Championship action.

There were bright spells in their 20-point loss to Sevenoaks even being without four key players in Andrea Kohlhaas, Ashleigh Munns, Lucrezia Costa and Claire Paxton. The Rebels were led by 18 points from Angel Waithe and will be keen to get their full squad together as their league season begins this weekend.

Fresh from their first WBBL win, the Queens played their first-ever league game at home with the same result as they defeated Cardiff by 13 behind a monster display from Maura Fitzpatrick with 28 points and 14 rebounds. GB’s Melita Emanuel-Carr also received the green light to play and had a 14-point outing for the newcomers.

Marlee Ball added 11 points and nine rebounds against her former side, while the hosts have added depth to their roster with the signings of Alex Haley and Bianca Osas-Maxwell. Coach Marriott’s side will be out to move to 2-0 as they head on the road to take on Durham on Saturday.

The only side not in action this past weekend as the Mystics await their regular season bow. They will host a red-hot Sheffield side on Saturday in their league opener having lost to the same opponents by 47 points in the Cup on the opening weekend.

First win as player-coach for Lauren Milligan as the Wolves put their 0-3 Cup record behind them to win a league opener for the first time since joining the league. Lizzy Harrison hit five triples in a WBBL career-high 23 points with Merissa Quick adding 20 points and nine rebounds in their 13-point road triumph in Newcastle.

Oaklands hit six threes in the final quarter alone as they put up 25 points in total to pull away from the Eagles in what had been a close encounter. They were also without influential Greeta Uprus, but had solid contributions from their academy contingent with Eva Karasaite hitting a trio of threes in a starting role. The Wolves next face Cardiff in a repeat of their Cup clash as they aim for two from two in the league.

Strength of The Pack: Coach @LaurenMilligan6 and @lizzyharrison celebrate at the buzzer as @Oaklandsball shock last year's Playoff Finalists @NewcastleEagle 77-64 in the @WBBLofficial. Harrison lead the team with a team high 23 points #WolfPack #BritishBasketball pic.twitter.com/GvPPDD7Ls1

Two straight wins have been followed by two straight defeats for the Archers as their league opener ended in a 13-point loss to newcomers Gloucester at the weekend. Stef Collins’ side had been victorious when the two sides met in the Cup, but fell away in the second half as they were outscored 22-11 in the fourth.

Denisa Molnar had 17 points in defeat with Shannon Hatch adding 15 points and 13 rebounds as the Archers were held to 31% shooting from the floor and only made 10 of their 18 free throw attempts. They head back on the road this weekend with a trip to face a resurgent Oaklands side – another team they beat in the Cup.

The Wildcats looked as they were going to be claiming a first win of the season, right up until they weren’t as Leicester snatched victory at the death. The visitors had moved into a seven-point lead early in the fourth, but were unable to put together a string of scores in a low-scoring tussle.

Shaunay Edmonds and Brooklyn Pannell both hit double figures on their debuts with fellow American Kennedy Nicholas adding 10 points as the Wildcats were held to 34% from inside the arc. Kenrick Liburd’s side have the week off to continue working on the chemistry ahead of their next fixture against Oaklands.

The Palatinates came up against a strong Sheffield side on Saturday and suffered a 33-point loss to start the regular season. Lee Davie’s side were the only team of the Hatters’ three opponents to break the 60-point barrier as they found success from outside, shooting 46% from three-point range.

Goretti Hurtado Barbeito had another strong showing with 21 points, but the Palatinates didn’t make the most of their possessions with 31 turnovers countering an efficient shooting display. Durham return home for the second weekend of league action when they welcome Gloucester.

Probably not the fixture Pride wanted to start the season as they went down to a 54-point loss at home to London. However, the young side showed fight and had their moments as new faces adjust to the level they are facing.

Maud Ranger posted 21 points and 15 rebounds for a double-double, but also had seven of the 33 turnovers committed by Caledonia against an unrelenting defence. They stay at home for their upcoming league fixture as they take on Newcastle, who they defeated last season, with the next chance to progress in the right direction.