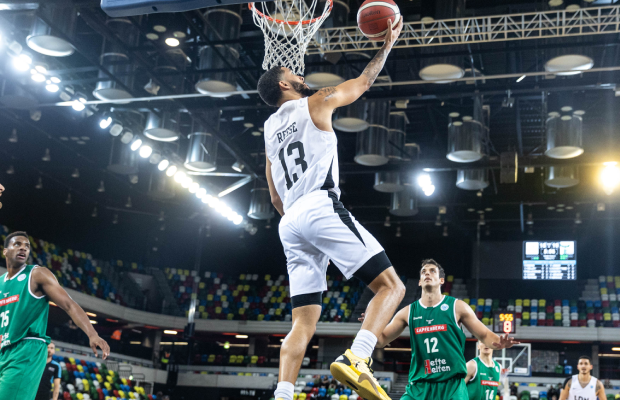 London Lions battled past Kapfenberg Bulls for a 68-58 victory at the Copper Box to continue their unbeaten start to the FIBA Europe Cup regular season.

Vince Macaulay’s side backed up their win on the road in the Netherlands to move to 2-0 in Group A alongside medi Bayreuth, who they meet next week.

Both sides made a slow start, but the visitors were able to finish the opening period the stronger to build an early 11-17 cushion. London took the lead through plays at both ends from Aurimas Majauskas with a charge followed by an and-1 to make it 20-19.

The Lions moved as many as five ahead as defences remained on top as Kapfenberg closed on a 10-4 run to take a slender 32-33 lead going into the half-time break.

The Lions moved back ahead early in the third at 40-39 through a putback from Julian Washburn and they led by six before a 7-0 response from the visitors. However, Reese had the final say with the perfectly weighted floater to beat the buzzer and give his side a 50-49 advantage to take into the fourth quarter.

The momentum carried forward as London turned on the style at both ends of the floor with a 12-0 run spanning almost five minutes with Dirk Williams and Reese both netting triples. The visitors stopped the rot with a three of their own, but still trailed by 10 inside the final four minutes.

More dunks from Kylor Kelley put the finishing touches on the win with the Lions improving their overall points difference.