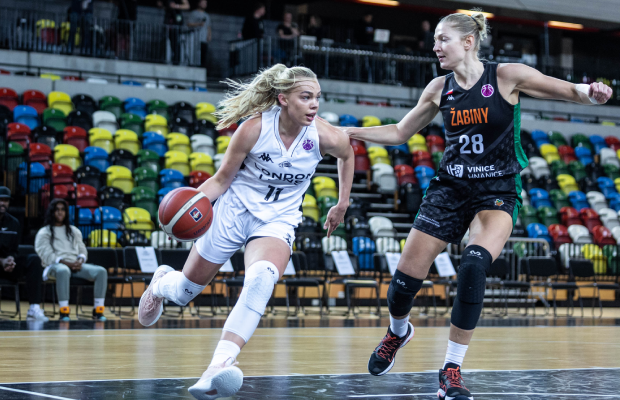 London Lions suffered their first loss in the EuroCup regular season as they were beaten 74-82 at home to Czech side Zabiny Brno at the Copper Box, on Wednesday.

The Lions trailed by 12 after the opening quarter and despite twice cutting double-digit deficits into one-score games, they were unable to repeat last week’s victory in Germany.

Holly Winterburn top scored with 21 points on a return from isolation, while Kennedy Leonard added 18 points and six assists. Shanice Beckford-Norton had 12 points and Jo Leedham-Warner had 10.

The visitors were active on the offensive glass early, in particular through Bria Holmes. Winterburn’s drive put the Lions up 8-7 but a 10-0 response was capped by successive triples in a spell aided by multiple turnovers from the home side.

Winterburn hit a three out of the timeout as part of five straight, but Brno closed the opening quarter with an 8-0 run to move 13-25 ahead for a double-digit advantage.

London were 4-of-19 from the floor, but found success in the form of Winterburn attacking the basket and it was the defence that sparked the offence with Azania Stewart’s inside presence along with Chantel Charles as disrupting factors.

Leonard hit back-to-back threes with Cassie Breen soon following suit to cut the gap to a single point at 28-29. However, the visitors – who had to wait nearly five minutes for their first field goal of the second – would take a 32-37 cushion into the half-time break.

It was a one-score game early in the third, but Stewart would pick up a fourth foul and their opponents took advantage of the mismatches through the 36-year-old Slovak international Anna Jurcenkova, who quickly moved into double figures.

Beckford-Norton sparked a much-needed 8-0 spell with six points to cut down a 10-point deficit, but the Lions would need a three from Leedham-Warner to avoid trailing by the same margin as they went into the fourth down 55-62.

Jurcenkova continued to add to a growing double-double with the two teams trading baskets in the fourth, which played in to the hands of the Czech side. London continued to fight to claw back the deficit, but their opponents kept coming up with answers and took the win despite a late 8-0 run.