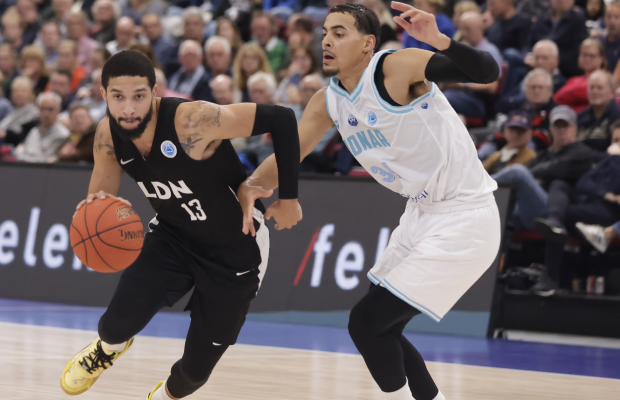 London Lions made history by becoming the first British men’s team to win a European game for over a decade as they beat Donar Groningen 60-79 on the road in their FIBA Europe Cup debut.

Vince Macaulay’s side made their move in the second quarter to establish a double-digit advantage going into the break and that would prove decisive on their way to the win.

Marquis Teague returned to action with 22 points, six rebounds and six assists off the bench with Julian Washburn adding 13 points and 11 rebounds, while Isaiah Reese had a 12-7-8 stat-line.

It was a cagey start with the teams level at 13-13 after 10 minutes with Reese getting the opening score and Washburn leading the way on the defensive end with a couple of early blocks. Donar edged ahead to lead 17-15 in the second before the Lions put together a pivotal spell to take control.

Teague netted five points in quick succession to cap a 16-3 run and the Lions put together a strong finish to the quarter to lead 39-22 at the half-time break. Their opponents were 1-of-9 from three-point range with London not faring much better from outside with 3-of-13, but they were finding their way to the basket at will with 67% success rate inside.

Washburn hit a triple at the start of the third as the lead extended beyond 20 points in an 8-2 opening and the Lions would take a commanding 60-44 advantage into the final 10 minutes. London repelled the attempted fightback in the fourth and secured the all-important win.

The Lions now face a run of three consecutive home games – as part of double-headers with the women’s side – at the Copper Box with their next game against Kapfenberg Bulls next Wednesday.