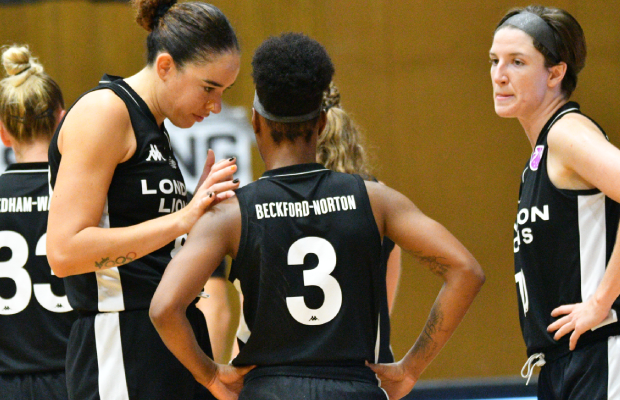 London Lions left it late to pull off an impressive 78-81 triumph away at Rutronik Stars Keltern in their EuroCup regular season opener.

The result meant a London double in Europe with historic regular season wins in successive days following the victory for the BBL side in FIBA Europe Cup action, on Wednesday.

Kennedy Leonard top scored with 21 points along with six assists, while Cassie Breen and Shanice Beckford-Norton had 19 points apiece in the win with Jo Leedham-Warner netting a decisive three inside the final 90 seconds to finish with 11 points and nine boards.

“I was really impressed that we found ourselves nine down on three occasions, but never let the game get away from us and found a way to win,” head coach Mark Clark told Hoopsfix. “Just proud of the whole staff, the team and let’s hope people come out to watch us and the men play next Wednesday and get to watch great level European basketball.

“That three [from Jo] at the end was immense. Her commitment to everybody else is phenomenal and her commitment to the game in British basketball seems to be overlooked by some of our governing bodies.”

2016 EuroCup winner Leedham-Warner started in the absence of Holly Winterburn and had an instant impact at both ends; opening the score with a three off the Leonard assist before forcing a turnover at the other.

Keltern edged ahead for their first lead at 10-7 before Breen responded with a corner three off the bench. The sharpshooter would hit another – despite a stumble in the lead up – in the midst of a 7-0 close to the opening period as the visitors moved into a 14-19 advantage.

CORRECTION: @Cbreen_10 is 💵 from EVERYWHERE!

Lions lead 19-14 at the end of the first quarter 🦁 pic.twitter.com/SSD7ry9cxq

However, the German side hit back with eight unanswered points at the start of the second and it took back-to-back layups from Azania Stewart to halt their charge before a further 10-0 spell made it 32-23.

The shots from outside weren’t dropping for the Lions until Leonard connected in timely fashion as another strong finish to a quarter helped cut the deficit to four at the half-time break – both sides already in double figures for turnovers at this stage.

Leedham-Warner hit a second triple at the start of the third with Beckford-Norton making tough shot after tough shot to move into double figures. The points kept coming at the other end, however, with the two teams trading blows throughout the quarter.

London found Breen open for three on consecutive plays to cut the gap to a single point, but Keltern had the final score to take a 59-56 lead into the fourth. That would extend off the back of a 7-2 opening, yet the Lions continued to battle to remain in contention.

Leonard’s three sparked a 5-0 run to tie the game at 70-70 and set up a tense finale. Again, the teams traded crucial baskets as the contest crept into the all-important final two minutes.

The decisive play came from an end-line ball as Breen overshot the inbound, but Leonard pulled off a miraculous save to keep the possession alive and it resulted in a huge three from Leedham-Warner. Huge.

– London Lions became the first British side since Rhondda Rebels to play in the regular season
– Starters: Leonard, Beckford-Norton, Leedham-Warner, Charles & Stewart
– Lions were without Holly Winterburn and Leah McDerment (injury, DNT)
– Former EuroCup winner Leedham-Warner made a first start for the Lions
– London’s next three group games are all at home at the Copper Box Arena