Holly Winterburn: "We showed great character and we can still get better" - Hoopsfix.com

Support
Home / News / Holly Winterburn: “We showed great character and we can still get better”

Holly Winterburn: “We showed great character and we can still get better” 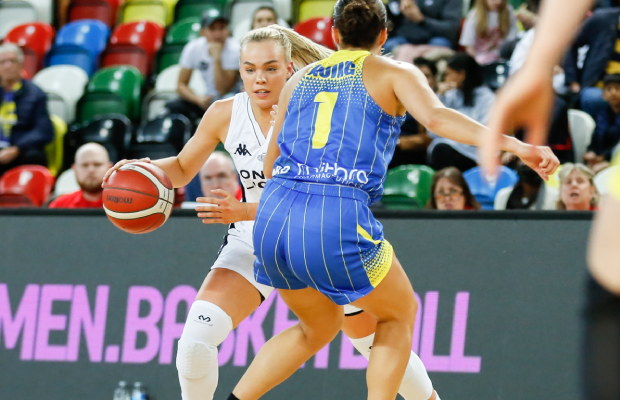 Holly Winterburn insists London Lions can keep getting better after they pulled off a memorable win over Castors Braine in EuroCup action on Wednesday.

The Lions were not at their best, particularly on the offensive end with 27 turnovers, but they got the job done and found a way to win, which should not be overstated in Europe as they improved to 2-1 in the group.

“Especially after the loss last week, we really came out and put in a performance,” Winterburn told Hoopsfix post-game. “It wasn’t perfect, but we were tough, we fought for everything and ground it out. It was really great character shown by the team and we can get better so it’s exciting for the future.

“Everyone is beating different teams [in the group] and you have to turn up to every game and prepare well. The group is burst wide open. We have one more game at home and then go on the road and we have to keep playing hard.”

Winterburn top scored with 15 points in the six-point success over Belgian opposition at the Copper Box and is currently averaging 18.5 points, 4.3 rebounds and 5.0 assists per game in the competition this season.

The 21-year-old made the summer switch to the Lions from Leicester Riders and is thriving in a new role – also boosting hopes of a GB Senior debut with Winterburn expected to be called into camp ahead of next month’s EuroBasket qualifiers.

“To be honest, I’m loving it,” Winterburn said of her time with the Lions so far. “I couldn’t ask for anymore on or off the court.

“I feel like I’m really growing into that shooting guard role that I think is going to be best for me – a 2 guard that can play the point guard rather than a point guard in itself.

“I’m loving it. I have no complaints. I’m really enjoying the higher level and having better teammates around me to help me get better.”

Before their next European game, the Lions return to league action with a trip to face Cardiff Met Archers as they currently sit joint top with Sheffield Hatters with four wins from four.

The Lions enjoyed a 117-51 rout against Gloucester City Queens last Sunday with seven players in double figures and Winterburn believes the team can keep building upon their performances.

“When we lost last week, we put in a great team performance against Gloucester and I think that really helped us,” admitted Winterburn. “Practice is really important. We have to keep building day by day, we’re not the finished product yet but we have to get there as quick as we can.”

Two from three in the EuroCup regular season so far, the Lions can take a major step towards qualifying for the knockout stages when they host Rutronik Stars Keltern next Wednesday in their final home game.