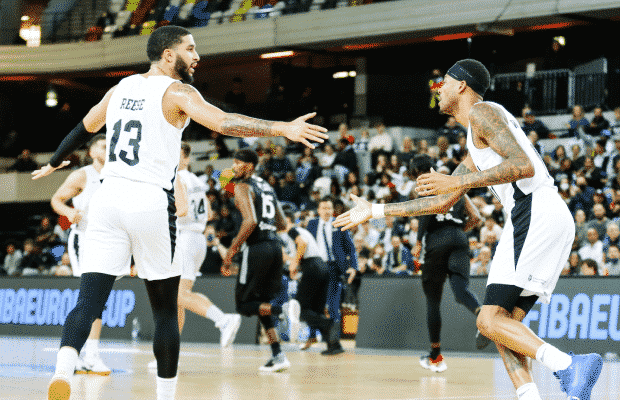 London Lions maintained their unbeaten start to their FIBA Europe Cup campaign as they recorded an impressive 91-81 win over medi Bayreuth at the Copper Box Arena, on Wednesday evening.

The German side had also entered the contest off the back of two consecutive wins, but it is Vince Macaulay’s side that move to 3-0 to claim the outright hold on top spot.

The visitors scored the first four points of the game before London settled with a 9-0 run that featured the regular alley-oop connection between Reese and Kylor Kelley. The American forward connected again late in the quarter as the hosts’ momentum had been stalled as they now led 22-21 after 10 minutes.

The game was soon level, despite an opening three from Lorenzo Cugini, but a tough and-1 finish from Jordan Williams sparked a pivotal 13-2 run with Julian Washburn also joining in on the action from downtown. Reese hit a tough stepback three late in the half as the Lions would go into the break with a commanding 52-36 advantage.

An expected response from Bayreuth followed when play resumed as they cut the gap back into single figures. Aurimas Majauskas scored five straight in a spell that re-gained the momentum for the Lions with a 73-62 cushion to take into the fourth after their opponents had got back to within seven.

However, there was no late drama as the Lions made sure of the win to continue their winning momentum as Dirk Williams continued to add to his points tally.

The Lions round out their three-week home stretch next week when they come up against Donar Groningen, who picked up their first win on Wednesday in an overtime win in Austria.