Louise Rouse out to make strides with Riders - Hoopsfix.com

Louise Rouse out to make strides with Riders 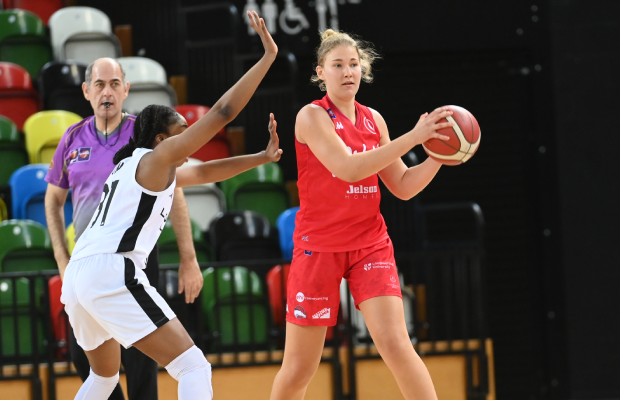 Louise Rouse has rapidly grown into one of the top British prospects in her age group with a strong desire to continue that upwards trajectory of her development.

The 19-year-old broke through at Oaklands and opted to continue to study and play in the UK – as opposed to heading stateside – with Loughborough University becoming the clear frontrunner of the process.

“Coming to Loughborough was one of my top choices from the start,” Rouse told Hoopsfix. “As well as being globally renowned as a top sporting institution, it’s also well-regarded for academics which was an important factor for me when it came to choosing where to study.

“There were no opportunities in America that really stood out for me over coming to Loughborough.”

How it started ⏩ how it finished!@louise_rouse_ moves on after three strong years in the @OaklandsWolves and two in the @wbblofficial!

Her rapid development will now continue as she makes the move to @lborobasketball and @RidersWomen !

Rouse makes the challenging step up in joining a team that are traditional title contenders in the WBBL having been one of several new additions at Leicester Riders this summer – quickly showing that potential with a double-double in an early Cup win against Gloucester City Queens.

There is also the additional factor of a positional adjustment to contend with as Rouse looks to branch out into the role of a stretch-four. The improving outside threat was on display in Leicester’s recent road win at Newcastle Eagles with a couple of crucial threes at the start of their fourth quarter comeback and Rouse posted a WBBL best of 17 points against Caledonia Pride.

And, ultimately, trying to get better is the key for Rouse with the chance to develop and grow as a player in a new environment.

“I just want to keep improving,” she stated. “It’s certainly challenging competing against those with considerably more experience than me, but all I can do is just keep learning from every game; make mistakes, but look to the next play and try to get better.

“I’m really enjoying my time playing at the Riders. The girls on this team are great and it already feels like a big family.

“Hopefully, I can can have an impact in the 4 position. At Oaklands I got comfortable playing in the centre, but I’m enjoying expanding my game to the three-point line as I develop new skills and consistency with my shot.”

Rouse’s basketball journey only began around five years ago at West-Herts Warriors with the rising star crediting former coach Tony Marmo for recognising her potential. A move to Oaklands College followed and it wouldn’t be long before Rouse was pushing for contention to be part of the senior squad.

A debut in the WBBL Championship came as a teenager in 2019 with Rouse hitting double figures for the first time against London Lions with a 12-point cameo. The forward’s role would continue to increase; building towards a prominent starting berth in the 2020-21 season with averages of 8.2 points, 5.7 rebounds in 24.9 minutes per game.

“I never planned to play at Oaklands, but it ended up being my only choice to continue playing basketball,” admitted Rouse. “Little did I know that I would go on to meet my second family.

“I really enjoyed developing under the guidance of Lee Ryan, and I couldn’t have asked for a better group of girls to learn from in the WBBL – they created such an exciting environment for me as a young player and I loved every minute of it.

“I remember watching WBBL games hoping one day I’d join them on court, but didn’t think I’d get the opportunity so soon. It became an exciting goal for me to see if I could compete with some of the best players around the country.

“Being trusted with minutes in the WBBL as a junior was a privilege and I made the most of it. It was during my second year that I realised I was competing and holding my own in this league.”

The Wolves are stepping up their commitment to developing young talent with more opportunities for their academy players to gain experience in the top-flight this season. And, Rouse is a prime example of the success that can come from receiving that chance with only fond memories from reflecting on her time at Oaklands.

An early-season reunion has already been and gone, albeit on neutral soil, with Riders claiming a Cup win in Cardiff against an Oaklands side now coached by Rouse’ former teammate and mentor, Lauren Milligan.

“It has helped me a huge amount having that experience playing at Oaklands,” said Rouse. “It was such a great opportunity to play good minutes – a lot of people my age don’t get that, so I’m grateful for that and it made me feel more confident in coming here.

“It was an interesting game [facing Oaklands]. It did feel very odd, especially as I know my Oaklands team more than my Riders team so far.

“But it is great to see Lauren stepping into that role – I loved being coached by her [in the WEABL] and playing alongside her in the WBBL – she has so much passion for the game and it’s great to see younger players being inspired by her, just as I am.”

Rouse’s performances last season in the WBBL – and in the WEABL – also earned a spot to compete for Team White in the Under-19 Women’s game at the 2021 Hoopsfix All-Star Classic amongst the top juniors in the UK. New teammate Katie Januszewska was also involved in opposition and the duo have combined in the starting lineups for Leicester early on in the current campaign. The Riders now have a 3-2 record in league play – after beating Caledonia on Saturday – with contrasting losses coming against the unbeaten co-leaders London Lions and Sheffield Hatters, whilst grinding out wins over Nottingham Wildcats and Newcastle.

Marg Jones has now taken over the head coach reins from Derrick Washington with the club looking to improve their fortunes with a talented roster at their disposal.

“Everyone still hasn’t played their best yet,” stated Rouse. “We have a lot of strong individual players and if we can learn how to maximise each other’s strengths, we can compete with the best. We are still gelling, but we are getting there.

“We want to be competing for one of the top spots in the league and we’re still figuring things out.

“I’m only at the beginning of my basketball journey and I’m excited to see how I can progress my game over the next few years here at Loughborough. I have access to some amazing facilities and a great coaching team so I’m making full use of them to see where I can get to.

“I’m very excited about being coached by Marg this season. I really think she will enable me to take my game to the next level.”