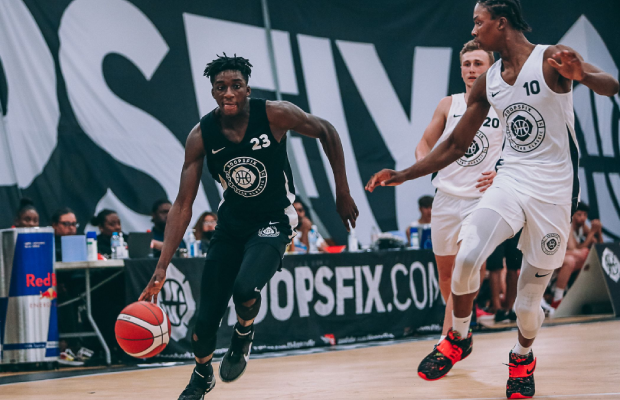 Team Black ran out convincing winners as they defeated Team White 115-70 in the Under-19 Men’s game at the Hoopsfix All-Star Classic, on Saturday.

Great Osobor made a 7-of-7 start from the field to finish with a game-high 20 points with Latrell Maitland adding 16 points as one of five other players also in double figures at the Battersea Sports Centre in London.

Alajiki may have been a late replacement, but he hit the ground running with a dunk straight from the tip, while Eze put any disappointment from the Dunk Contest aside with a three as Team Black made an early statement of intent in a 10-2 opening.

Great Osobor turned on the style with back-to-back dunks as the lead hit 10 points at 19-9. Flynn Boardman-Raffet sparked a 7-2 response from Team White with a triple as they closed to within four points, but a strong finish saw Team Black restore a double-digit advantage at 34-23 with Moyo Adekeye netting successive triples.

Josh Ijeh scored four points at the start of the second to bring his side back within seven before Latrell Maitland and Alajiki combined for all the points in a 11-0 burst to balloon the lead out to 18 points at 45-27.

That would remain the margin at the half as Team Black took a commanding 55-37 advantage into the break, though their lead did briefly peak at 21 points with Osobor the only player in double figures in scoring at this point.

Osobor – and Team Black – showed no signs of letting up when play resumed as the Myerscough and Bradford forward knocked down two quick triples as the lead continued to grow. Alajiki followed suit from beyond the arc to take the lead past the 30-point mark and the damage was already done.

Both coaches continued to spread minutes throughout their rosters and Team Black soared towards their century in the final quarter as Kane Daley hit the team’s 10th triple on their way to wrapping up a comprehensive win.

Team White fought until the end with 3-Point Shoot Out winner Alex Distras hitting a pair of threes and Toibu Lawal showing off his crazy athleticism with a big alley-oop late on, while Ovia finished with a poster to seal the victory.