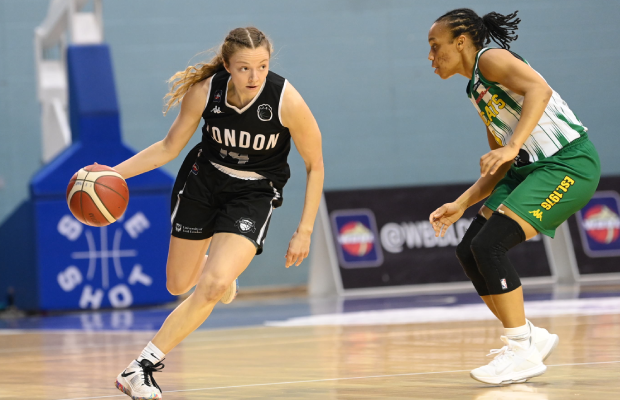 London Lions came through a tough battle with Nottingham Wildcats to advance to the WBBL playoffs final with a 77-68 success.

Shanice Beckford-Norton top scored with 18 points to help the three-seeds set up a final showdown with Newcastle Eagles – who prevailed in the first semi-final.

Cassie Breen exited the game with an innocuous injury a couple of minutes into the game, but would return later in the quarter in a cagey opening. The Wildcats were held to just a single point in a stretch spanning more than five minutes, but both teams were below 30% shooting from the floor.

A three from Valentina Klocker ended the first quarter to put London up 17-13 and they moved into an eight-point lead early in the second before Praise Egharevba helped instigate a 12-0 response to put her side ahead.

Breen ended a six-minute scoring drought for the Lions with a mid-range jumper with both sides having their rhythm disrupted. Beckford-Norton sparked a strong finish to the half to move into double figures with the Trophy winners with the 33-31 lead at the interval.

Mark Clark’s side then made their move with a 14-3 start to the third to establish control in the tie with a 13-point advantage, though they did lose Chantel Charles to injury during the run. And, back came their opponents with a 13-4 spell capped by a wide-open three from Simone Costa to make it a three-point game.

15-year-old Ines Goryanova hit a three to restore London’s double-digit lead at 58-46 ahead of the final 10 minutes as Nottingham dealt with foul trouble and an injury concern to Chelsey Shumpert.

Moa Lundqvist and Tia Freeman fouled out – as did Paige Robinson for the Lions – as Egharevba continued to have a big impact with an and-1 cutting the gap to just four points at 62-58. However, London had enough left in the tank to see out the game and keep hopes alive of a second piece of silverware.