Alison Gorrell: "It's a Cinderella story at May Madness" - Hoopsfix.com

Alison Gorrell: “It’s a Cinderella story at May Madness” 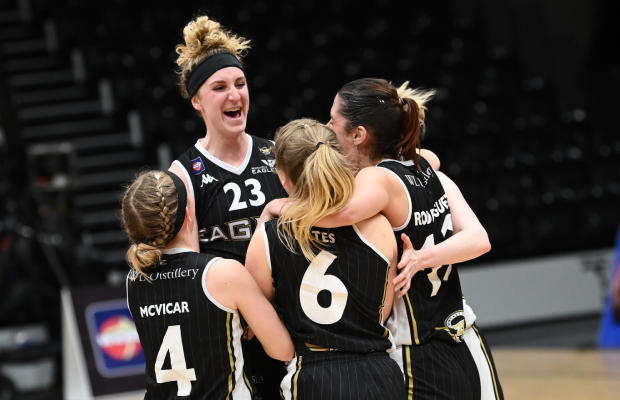 Alison Gorrell described Newcastle Eagles’ run in the WBBL playoffs as a ‘cinderella story’ as they advanced to the final.

The seven-seeds backed up their first round upset over league runners-up Leicester Riders with a bigger shock result as they took down the league champions Sevenoaks Suns in a 79-72 triumph on Friday evening.

#2 seeds ✅
#1 seeds ✅@NewcastleEagle are into the WBBL playoffs final with a triple-double from @alison_gorrell leading the way!#BritishBasketball

Gorrell finished with a triple-double of 22 points, 12 rebounds and 10 assists with several key contributions with just six players taking to the court as three starters – including Gorrell – played the full 40 minutes.

“It’s amazing – a cinderella story for May Madness,” she said in the post-game interview on Sky Sports. “It’s awesome. We can’t really believe it ourselves, but that’s what got us here – just having fun and enjoying it.”

The Eagles trailed by as many as 13 points early in the third, but stayed together and kept hitting big shots – particularly down the stretch – as they finished 13-of-26 from beyond the arc.

Rachael Bland hit five threes with three apiece for Abby Lowe and Maddy McVicar, while Gorrell also added two of her own from downtown.

“We had a talk at half-time, we were playing a lot tighter than in the first half and because of that

“We were really trusting each other. We were looking to find the open shooters and a lot of people were knocking them down. When we were shooting and relaxed, that’s when we are at our best.”

Newcastle next face the three-seeds London Lions in next Sunday’s final with the chance to cap a magical run through the post-season.

“We are just excited to be there,” Gorrell concluded. “We didn’t expect this at all, especially with how this season started for us with all the adversity, players changing and stuff, so we’re so grateful to be playing and making it to the final. It’s an amazing run.”