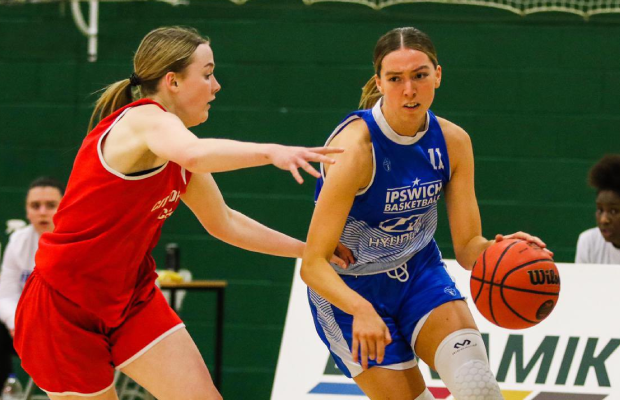 Ipswich overcame CoLA Southwark Pride in a defensive duel to win the WNBL D1 playoffs title with a 60-42 victory, in Nottingham.

Nick Drane’s side completed a domestic double as they added to their league title success with a strong finish to the third proving pivotal in the contest.

Esther Little produced another all-round display as the MVP with eight points, 12 rebounds, 10 assists and four blocks with Harriet Welham top scoring with 16 points despite an early struggle.

Susannah Rafiu impressed off the bench with a double-double of 11 points and 10 boards along with five steals.

Both sides were unable to settle into an offensive rhythm early with Ipswich scoring as many points as they had turnovers in the opening period as they trailed 13-11, despite keeping their opponents to 25% shooting.

CoLA moved six points ahead at the start of the second before league MVP Harriet Welham snapped her scoring drought with a triple. The scoring was similar to the first quarter with Jackson Gibbons’ side narrowly extending their lead to a 25-22 advantage at the half-time break.

Defences remained strong when play resumed with Simona Henshaw and Little trading big blocks as they refused to give any easy looks. Ella Pearson would provide the spark for Ipswich with back-to-back triples with Cameron Taylor-Willis following suit as part of a 10-0 run to put their side up 42-33.

Ipswich stayed in the ascendancy at both ends of the floor as they continued to pull away in the fourth quarter with the gap hitting 20 points towards the end of the game.