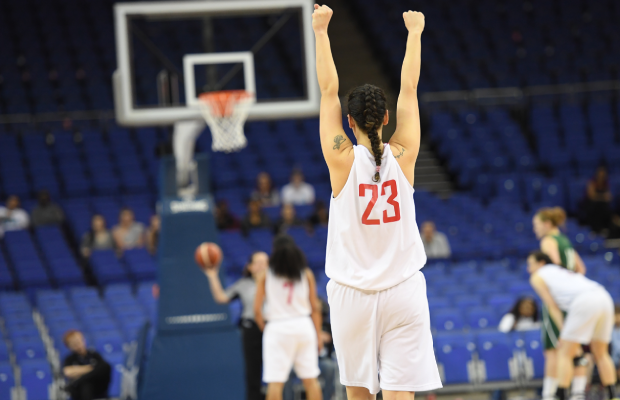 Diana Voynova knows all about winning the WBBL playoffs and played for both teams aiming to get their hands on the trophy this weekend.

The former Bulgarian international captained Team Northumbria – now Newcastle – to a memorable triumph in 2016 before later playing for BA London Lions in a short spell in the top-flight.

“It is definitely nice to see the two teams I’ve played for, in the WBBL, in the final against each other,” Voynova told Hoopsfix. “They are both great organisations and deserve to be there.”

But who would Voynova be rooting for on Sunday? A tough question, she says.

“I will have to go with the Newcastle Eagles. I’ve spent a big part of my professional career with the club and Newcastle will always have a special place in my heart.

“With that said, I will also be happy for Mark Clark and the London Lions if they take the win.”

Voynova played under both head coaches during her time with the WBBL with Clark and Chris Bunten and described their contrasting styles.

“They have very different coaching styles but both are very passionate.

“With Chris, what you see at games is what you get at practice. He just never stops but that is part of who he is and it works for him.

“I didn’t play long for Mark but I had fun during my time on the team. He is a lot more composed, firm but fair.

“They are both very good coaches and great competitors who know what it takes to win, I enjoyed playing for each of them.”

Voynova posted 14 points and seven rebounds as Northumbria won their first piece of silverware in the WBBL with a 75-68 triumph over Nottingham Wildcats. The now 33-year-old held the trophy aloft with current Sevenoaks star Ta’Yani Clark – who missed the final due to injury – as they overcame the top seeds.

“Winning the playoffs final in 2016 is definitely one of the best moments in my playing career – it was an amazing experience from every aspect,” she recalls. “That was the first time the playoffs final was held at The O2 Arena and the expectations were high.

“When I look back on the game itself, I sometimes wonder how we won to be honest. We didn’t have a great start and we were down the majority of the game, I think we took the first lead with something like four minutes to go in the fourth quarter or maybe even less.

“I can’t remember exactly but I remember a crucial steal by Abi (Abigail Asoro) and then a five-second violation on an inbound play which changed the whole game and shifted the momentum in our favour. From that point on, we never looked back really.

“I am still so proud of each and every one of us how we responded and never gave up.

“As a player, these are the moments you work for all season, even your whole career, and to win it all is just so special.”

Five years on, and the club are back challenging to be the final team standing in the post-season off the back of a magical run in the playoffs. And, Voynova has been impressed by the standard across the league having taken a keen interest in the fortunes of the Suns.

“Although I was rooting for Sevenoaks, I have to say Newcastle played their hearts out in both playoff games, so massive credit to them for providing one of the most exciting post-seasons so far.

“From the games I have seen, the league looked quite competitive which is great to see. I love when there is a good competition across the board and not one team dominating.

“I did watch a few of the playoffs games and can honestly say they did not disappoint.”

I think I’m still processing that last game 🤯 Absolutely gutted for @SevenoaksSuns but what a season they’ve had!!! Massive congrats to @NewcastleEagle on another incredible win!

Voynova also played in Europe and has since retired from professional basketball, though did suit up for Thames Valley Cavaliers in WNBL Division 1 during the curtailed 2019-20 campaign.

Now working as an events manager at a university in London, Voynova is also the coach of Division 2 women’s side Brent Bulls and hopes to get going next season.

“I still try to be involved with basketball as much as I can. I’ve been coaching with Love Basketball Academy and Brent Bulls – due to the pandemic, our season didn’t go ahead, but I am really looking forward to September.

On Sunday’s final, she concludes: “I would like to wish both teams good luck in the final. You all worked so hard to get there so enjoy the moment.”