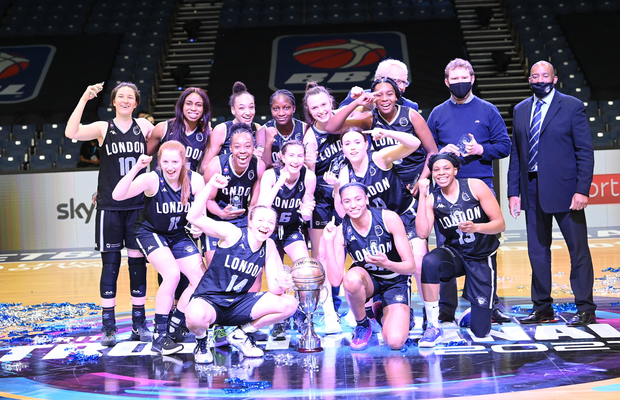 London Lions claimed a historic first piece of silverware in the WBBL after they defeated Nottingham Wildcats 96-64 in Sunday’s Trophy final, in Worcester.

Mark Clark’s side were appearing in their second final in seven years of the WBBL, and they led from start to finish in a convincing display.

Kennedy Leonard starred as the MVP with 21 points, nine assists and seven steals, while Cassie Breen put up 25 points inside three quarters.

Breen opened the scoring with her trademark ‘catch-and-shoot’ to set the tone for the afternoon ahead. Nottingham’s task became a lot tougher when star player Jasmine Joyner went down with a serious injury inside the opening two minutes. The Lions capitalised with Leonard hitting twice from beyond the arc – either side of Praise Egharevba’s opening score for Nottingham – with Shanice Beckford-Norton following suit to cap a 13-2 start.

The gap increased to as many as 18 points in the first period with a second three from Chelsey Shumpert ending the quarter with the Wildcats facing a 13-28 deficit early on. They made a brighter start to the second as Shumpert fired in two more threes to bring her side back within 10 points.

However, London’s defence took control as they kept their opponents scoreless during a 13-0 run as Breen and Stephanie Umeh combined for the first 11. Shumpert stopped the rot, but the Lions continued to pull away to take a commanding 56-26 advantage into the half-time break.

They went 19-of-23 from the foul line with a perfect 10/10 from Breen with Shumpert one of three players on the Wildcats on three fouls, along with forwards Moa Lundqvist and Egharevba.

Nottingham refused to give up, despite the 30-point deficit and battled away to edge the third period. Shumpert and Breen continued to be the focal points of their respective offences as the American duo both entered the final 10 minutes on 25 points.

The Wildcats had too much to claw back as the Lions were able to turn on the style in the final period with 15-year-old Ines Goryanova netting five late points as the celebrations began.