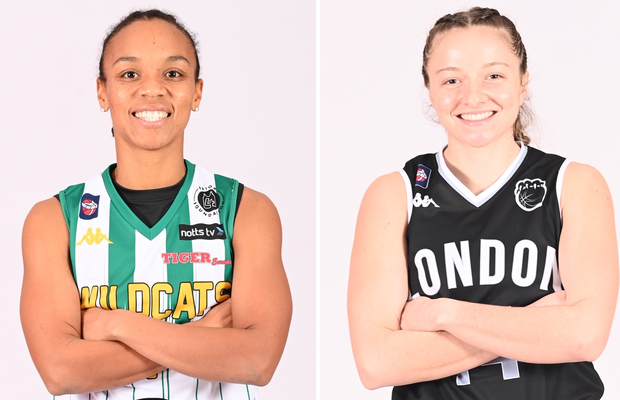 The second piece of silverware is on the line on Sunday as Nottingham Wildcats take on London Lions in the 2021 WBL Trophy final.

The Wildcats were last victorious in lifting the 2018 WBBL Cup title, while Mark Clark’s side were beaten in their only previous final.

The Lions were the first to start their campaign as they defeated Essex Rebels 83-69 in one of three first-round encounters. Kennedy Leonard top scored with 18 points, while Stephanie Umeh had 16 points and 10 rebounds off the bench.

Nottingham started at the quarter-finals with a comprehensive 75-41 success over two-time finalists, Durham Palatinates. Chelsey Shumpert and Jasmine Joyner combined for as many points as the hosts conceded.

London received a bye into the last four after their anticipated clash with Sevenoaks Suns was cancelled due to the COVID-19 regulations and they then knocked out the three-time defending champions, Leicester Riders with a 15-point win on the road with a 5-11-15 line from Leonard.

The Wildcats also prevailed on the road as a dominant second-half display helped earn a 15-point win of their own in seeing off Manchester Met Mystics. Shumpert and Simone Costa both added 19 points, while Joyner posted 24 points and 15 boards in the win.

New name on the Trophy

This is the seventh edition of the WBBL Trophy with only three previous winners of the competition. Nottingham Wildcats and London Lions both lost their sole final appearances against Sheffield Hatters in the first two years, while Sevenoaks Suns were victorious in 2017 over Leicester Riders, who then went on to win the title three years in a row.

The Riders avenged a loss to the Suns with their 2018 triumph before overcoming Durham Palatinates in successive years including what turned out to be the final game of the curtailed 2019-20 campaign. Their reign was ended at the semi-final stage with that 58-73 loss at home to the Lions.

Can the Wildcats find a way to stop Cassie Breen? In the first meeting between the two sides, Breen fired in seven threes in a 35-point haul in a stunning performance that Nottingham had no answer to.

Breen then scored 13 points a couple of weeks later with 3-of-7 shooting from outside in 25 minutes of action as the Lions were still able to record a convincing win. The Wildcats simply cannot allow the American to get her eye in early because nobody in the league heats up quicker.

Breen has been a 50% shooter in all but two of nine league appearances so far with the outlier being last week’s league clash with Oaklands Wolves after going 0-of-6 from three with just six points. One thing is for sure that Breen will keep shooting and her team-mates will keep trying to get her open – Nottingham will know it’s coming, but containing it is another task altogether.

Who will win the battle in the paint? There can be little argument against the suggestion of Jasmine Joyner being one of the best inside players in WBBL history. A highly efficient scorer, a constant threat on the boards at both ends and a devastating shot-blocker. Joyner is a walking double-double and the Lions have a big challenge in slowing her down – she poured in 37 points in their first meeting, but then only had eight shot attempts in the second.

Part of that will be how they defend Joyner, herself, but another part is limiting Shumpert’s impact particularly in transition as their link up is telepathic. The Lions have different players they can throw into that equation as they force different situations with their smaller lineup as Paige Robinson and Stephanie Umeh rotate.

Avoiding foul trouble early will be key on both sides. London’s back-court likes to penetrate and attack the basket and any time that Joyner is not on court protecting the rim will be an advantage, while they also cannot allow to give up the mismatch inside.

Who can be the unsung difference makers?

You don’t think of Shumpert without thinking of Joyner, and vice versa – and you won’t win any ‘Mystic Meg’ prizes for predicting one of those two as a potential MVP for Nottingham. The same goes for Leonard and Breen for London with the duo forming an equally potent partnership that can take over a game in a hurry.

And while those players would be considered favourites for MVP, these two sides have great strength in depth that includes a number of emerging academy prospects that will be itching to get their chance on the big stage, including 15-year-old Ines Goryanova.

⏪ 2016 – First WBBL final for @AbbeyBasketball:
Diana Naydenova-Goryanova played at the age of 42.

If you extend to a ‘big three’ you have Siobhan Prior – a veteran Senior international, who encapsulates the heart of the club and will give anything to win – and Shanice Beckford-Norton – a player that deserves to be in the conversation amongst the top guards in the league.

Nottingham have been without Prior for most of the season, while Tia Freeman and Simone Costa are versatile guard/forwards who have also been absent at times and add an all-round threat. Swedish forward Moa Lundqvist goes under the radar at times because of Joyner’s brilliance, but could find increased opportunities when her front-court partner attracts the focus of the Lions defence.

Umeh has been somewhat of a silent assassin for the Lions. Coming off the bench, she gets into good positions as an efficient scorer. Robinson has added a scoring touch in recent weeks, but that’s not her primary role and that defensive battle inside could be pivotal in this contest. And of course, Chantel Charles – who has missed game-time recently – a player that does a bit of everything for the Lions at both ends of the floor and someone that impacts the game beyond the box score.

Its time to meet the @NottmWildcats 🏀

📺 Catch them this Sunday on @SkySports
🏆 Competing for the @WBBLofficial Trophy
🖥 Also on @SkySports YouTube
Link: https://t.co/ge1Jg9YkVl pic.twitter.com/DfBTRfKIzm

Its time to meet the @London_Lions 🏀

📺 Catch them this Sunday on @SkySports
🏆 Competing for the @WBBLofficial Trophy
🖥 Also on @SkySports YouTube
Link: https://t.co/ge1Jg9YkVl pic.twitter.com/9TKRMbkgtE

The WBBL Trophy final is scheduled to tip at 3pm and can be watched on Sky Sports Arena/Mix channels and Sky Sports’ YouTube channel.