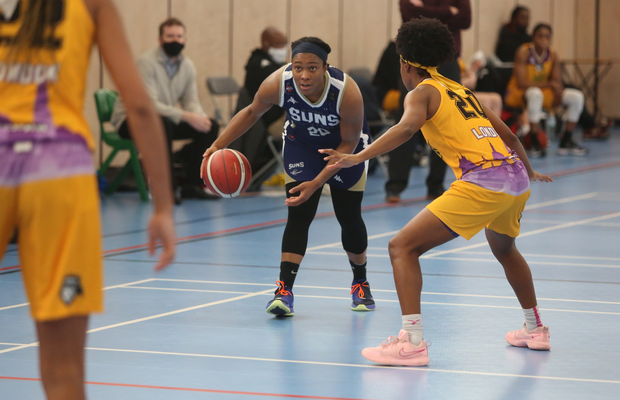 Another weekend in the books, albeit with a reduced schedule with only one of the four semi-finalists confirmed so far.

Leicester Riders remain unbeaten, while we had the first look at Sevenoaks Suns and one team completed their set of Cup fixtures without stepping on court. 2020.

Cup title defence up and running for the Suns as they held off the challenge of BA London Lions to win by 10 on the road. Janice Monakana top scored with 19 points, but the visitors had key contributions throughout the roster as they set their stall out for the new campaign.

Len Busch’s side are now guaranteed to advance following the cancellation of their game against Oaklands and will wrap up top spot with another win over Cardiff on Sunday.

Stifling. The Riders are not holding back on the defensive end as they put the clamps on a dangerous Nottingham side on their way to making it back-to-back victories. Jasmine Joyner was contained to just 6-of-26 shooting by the stern collective interior defence, while Chelsey Shumpert only managed 3 of 19 attempts from the floor.

Holly Winterburn put up a double-double in the win with Kate Oliver top scoring on her return to action, though despite their dominance, the Riders struggled shooting the ball and are still not quite over the line yet in the battle for the semi-finals.

Still Perfect: @RidersWomen maintain their 100% start to the @WBBLofficial Cup group stage with a convincing 61-48 win over rivals @NottmWildcats. Kate Oliver led the way with 14 pts, 8 rebs and 3 assists. They now go 2-0 whilst the Wildcats fall to 1-1 #BritishBasketball pic.twitter.com/oktIj3qF0k

The Eagles had to win on Sunday, and they did. Now, they have to win again as they welcome the unbeaten group leaders this weekend. Alison Gorrell and Maddy McVicar combined for 46 points as they doubled up the Mystics in the final quarter to take a double-digit victory.

Season-ending injuries to Maria Fernandez and Sarah Birkett are a blow, but the Eagles had their European front-court duo back in Lisa Koop and Mante Kvederaviciute, while Jorjah Smith has now arrived from Australia.

Only a win will do against the Riders, but victory for Nottingham on Saturday would leave Chris Bunten’s side needing to win by at least 13 points.

Tough going for the Wildcats this time around as they came out second best in a defensive duel on the road against the Riders. Jasmine Joyner was given little freedom, but still managed to post 15 points and 18 rebounds, though no other player reached double figures in scoring.

Tia Freeman was back on the court in a boost for the Wildcats with the key presence of Siobhan Prior missing, while junior star Shaniya Rose made an impact off the bench (6p/4r/3s) all late in the first half. A second win in the group on Saturday would almost certainly be enough to advance.

The new-look Lions finally got underway on Sunday with GB international Chantel Charles added to an exciting roster; signing a two-year deal to return to Barking Abbey, as revealed by Hoopsfix. Shan Norton looked bright on debut with a 19-point outing as the hosts pushed Sevenoaks close, despite suffering a 10-point defeat.

Mark Clark’s side need a favour from the Suns if they are to advance this weekend, but need to take care of their own business first and a 20+ point margin of victory over Cardiff is needed on Saturday to stay alive.

Down, but not out just yet in the North group – even if they don’t control their own fate. The Mystics dropped to 0-2 with a 10-point loss at the Eagles Community Arena but it was an improved display and they had 25 points from rookie Sophia Song.

Manchester are at home for the first time on Saturday and have to pick up their first win to have any chance before relying on the result to go their way when Newcastle host Leicester 24 hours later with a Riders win needed.

Still waiting for their first action on court, the Wolves now also have two losses to their name through the COVID-19 regulations as they announced a player had tested positive for COVID-19 on the morning of their scheduled home opener with Cardiff – also resulting in their final group game being cancelled.

That’s the end of the road for their Cup campaign as even in a three-way tie, they would miss out on points differential. Onto the regular season for Lee Ryan’s side.

Stef Collins had been looking forward to Cardiff’s season opener against Oaklands before COVID intervened and despite not getting the win like they had hoped, the Archers now have a golden chance to advance. Victory in either of this weekend’s double-header would secure their place in the last eight, though a defeat by less than 20 points against the Lions would also be enough to go through.