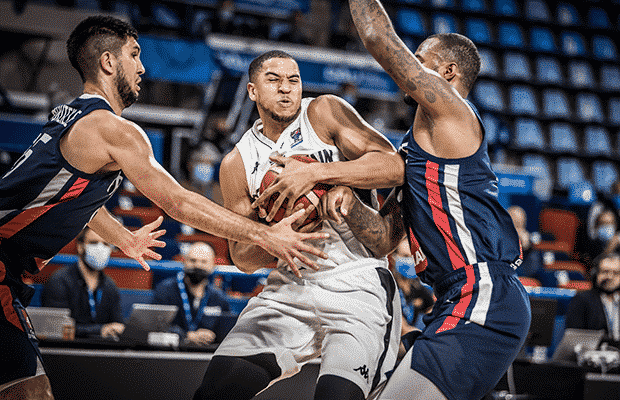 Great Britain’s Senior Men suffered a heavy defeat at the hands of France as they went down 79-56 in Pau, on Friday evening.

Marc Steutel’s side conceded the first 15 points of the game and never recovered as they dropped to 1-2 in the FIBA EuroBasket 2022 Qualifiers.

France finished third at the 2019 World Cup, and even with only three players from the bronze-medal winning squad, their strength in depth proved too much for GB to handle.

Steutel said: “I was really disappointed in our start, our lack of execution and felt that we were on the wrong side of the physicality and the pace of the game.

“We gave them a little bit of breathing space and against a team as established as France it is difficult.

“What I will say is our guys regrouped at half time and defensively we were better, executed and got some stops and were better in the second half.”

Dan Clark added: “We have to build on some positives from the game because we have another game on Sunday and we want to come back strong because it’s a game that we need to win.”

Ashley Hamilton led GB with 12 points, whilst Dan Clark and Gabe Olaseni joined him in double figures with 11 each.

GB had multiple attempts to open their account on the first possession and would be a sign of the frustration to come as their opponents pounced. France would enjoy a 15-0 start – aided by miscommunications at both ends for GB – through the first five minutes to assert their authority.

Olaseni finally broke GB’s duck at the midpoint, cleaning up another miss shortly before falling 20 points behind. Co-captain Dan Clark connected from three-point range but his side would trail 5-24 after an opening 10 minutes to forget.

Nelson netted his first points of the game from downtown early in the second, though France would maintain their control. The gap was extended to 26 points at the half with GB facing a 20-46 deficit, whilst giving up 15 turnovers against a strong defensive effort.

GB had a mountain to climb and showed signs of renewed life with an 8-0 start when play resumed including four points for Olaseni.

The momentum stalled as GB ended up edging the third period 17-16 as they were unable to make further inroads into the French lead, which became 37-62 ahead of the final period.

GB took some solace by also winning the fourth quarter, 19-17, but the outcome was already sealed.

GB now head into Sunday’s meeting with Montenegro having lost the previous encounter by seven points, in February.