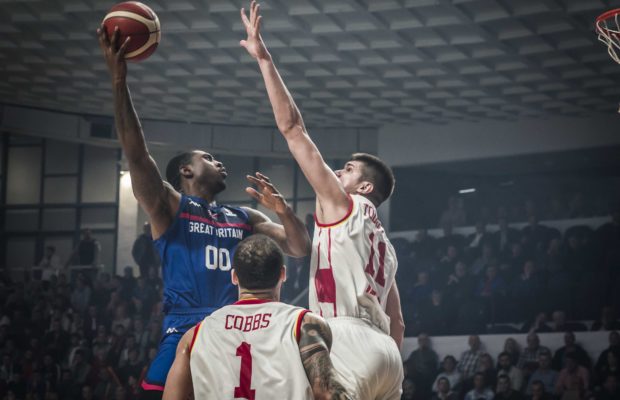 Great Britain’s Senior Men began their campaign to qualify for EuroBasket 2021 with an 81-74 defeat to Montenegro in Podgorica, on Friday evening.

With France and Germany to come in the group, the reverse fixture may prove crucial in deciding GB’s chances of making it out of the group.

Myles Hesson starred in defeat with 20 points, seven rebounds and two blocks with Ovie Soko close behind in scoring with 18 points along with nine boards.

The hosts raced out to an 8-0 start before Gabe Olaseni’s inside score finally ended the early GB drought at the 6:51 mark. Montenegro proceeded to score the next score for a commanding 15-2 advantage, but the visitors gradually began to show signs of promise as they stemmed the flow of turnovers.

Hesson hit a three in a bright spell for GB and Soko would follow suit to end the opening period with GB facing a 24-14 deficit. Despite their seven turnovers, they were still shooting at 50% through 10 minutes.

Hesson knocked down another triple to open the second as GB gradually chipped away to reduce their arrears. Within five, three then a single point as Olaseni continued to finish under the basket before moving to double figures without a miss from five attempts.

Montenegro would keep GB at bay to lead 42-38 at the interval, though Hesson provided the impetus to take into half-time with a huge throwdown inside the final minute.

It was Soko’s turn for a big dunk when play resumed for the second half and GB were back within two points at 44-42. However, Montenegro made their move and would double up their opponents in the third to take control with a 62-48 advantage.

Hesson sparked a GB revival at both ends of the floor with Sacha Killeya-Jones coming off the bench with consecutive scores as the deficit was down to just six points, at 69-63.

.@myleshesson putting on a show with a couple of big buckets, second one on the lob from @OvieSoko! 🇬🇧🏀 #Hoopsfix #BritishBasketball pic.twitter.com/FUI3TDKJ0o

GB continued to battle away and edged ever closer as Soko scored inside before going 1 of 2 with the offensive rebound leading to multiple 3-point attempts that would have made it a one-point game.

A Hesson putback was wiped out for a foul in the build up, sending Montenegro to the line as they made it 77-72 with 16.6 seconds left. Hesson found Soko for a dunk to quickly make it a one-possession game once again, but the hosts held their nerve to seal the win from the line.

– GB had won their last seven games dating back to 2018
– GB starters were Okereafor, Nelson, Hesson, Soko & Olaseni
– Ashley Hamilton, Conner Washington & Carl Wheatle were DNPs
– Next up for GB is a home clash with Germany on Monday night in Newcastle