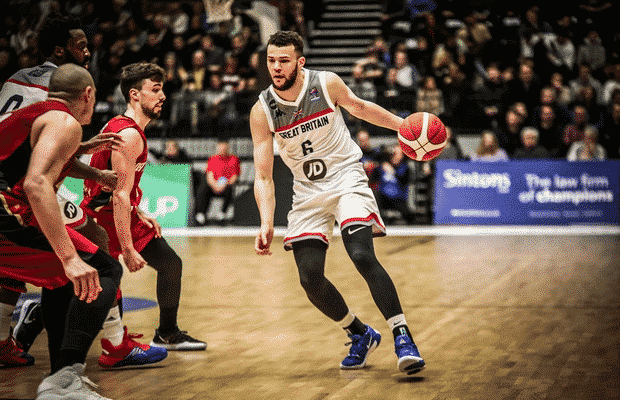 Great Britain’s Senior Men are back in action for the first time since beating Germany back in the February window of the FIBA EuroBasket 2022 qualifiers.

Marc Steutel is acting head-coach once more in the absence of Nate Reinking with GB facing a testing double-header against France and Montenegro.

GB have a 1-1 record with four games left and need to finish above at least one of those opponents with Germany already qualifying as one of the four co-hosts.

It was the Luke Nelson show at the Eagles Community Arena nine months ago in a breakout performance in GB Senior colours. The fourth-year pro got hot, and stayed hot on his way to a 26-point haul to lift GB past Germany for a perfect response to an opening loss against Montenegro.

Nelson continues to remind the German fans of his talent having made a bright start to the season for Gottingen in the German BBL – recently hitting a decisive go-ahead three in a 21-point display, whilst adding nine assists in the win as part of a hot streak.

Look for GB to get Nelson going early again, though both France and Montenegro should be wise to the threat and GB will need to smart and patient with their ball movement.

GB have plenty of options to back up the starting back-court duo of Teddy Okereafor and Nelson with guards Conner Washington, Dwayne Lautier-Ogunleye and Ben Mockford, while Tarik Phillip is back in the squad alongside debutant Rex Pflueger, who adds an extra shooting option.

Light in the front-court?

Ovie Soko is undoubtedly a big miss for GB in this window. And while GB still have the ever-reliable Gabe Olaseni at the centre position and the vast amount of experience from co-captain Dan Clark.

They are also missing Sacha Killeya-Jones – who recently suffered a serious injury in Poland – with the young forward providing Steutel with valuable minutes off the bench in the victory against Germany.

Akwasi Yeboah could fill that role this time around.

The 23-year-old turned pro this summer after signing in France with Pro-B side Saint-Quentin and does have two caps to his name with the GB Senior side. Yeboah previously starred for the Under-20s in 2017 with a spot on the All-Tournament team after averaging 14.3 points and 4.7 rebounds per game in helping lead the GB junior side to promotion.

Ashley Hamilton was a DNP against Germany, but would expect to see court-time in this window – particularly after his strong start to the BBL season, leading Plymouth Raiders through to the quarter-finals in the absence of fellow GB team-mate Andrew Lawrence.

Before the campaign got underway, the general consensus – rather expectedly – was that this group would come down to the clashes between GB and Montenegro. But as has already been proved, Germany and France are there for the taking, being far from the formidable forces they could be.

If GB can’t find a way past France, which is still a tough task, and Montenegro fall to Germany then Sunday’s meeting becomes massive. The head-to-head could prove decisive if the teams end up with the same records and that currently favours the Eastern Europeans following their seven-point win in Podgorica.

GB would take any win on Sunday, but if they could surpass that seven-point margin and take the head-to-head, it would stand them in good stead heading into next February. With both teams to round out by facing France and Germany in that final window, it puts greater importance on their second meeting.

As already mentioned, those two teams are not the certified locks they would be at full strength, or even close to full strength, so there’s still a lot to play for in Group H.

Home advantage has been taken away from GB in this window due to the coronavirus pandemic, and it will likely be the same in February, so it just comes down to performing on the night and it could come down to a 40-minute performance on Sunday.

“We’ve done our scouting,” said Steutel. “The guys have been fed information throughout the week, so they know what to expect. Some of our guys play in France, they’ve played against these guys before, so we know we’re up against it. We know we’re in for a battle.

“We’re aware of the group we’re in, we were aware of that when the draw happened, but we want to qualify for EuroBasket. It’s a challenge – a significant challenge – but I think that’s part of the GB mentality. We go in with an underdog approach and we have to try and earn it.”

GB take on France tonight before facing Montenegro on Sunday with both games in Pau tipping off at 5pm UK time.