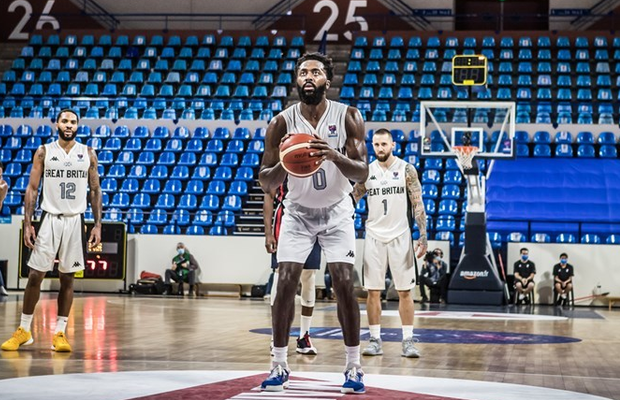 Great Britain’s Senior Men bounced back from a tough loss against France by overcoming Montenegro for a 74-49 victory in Pau, on Sunday evening.

They now control their own fate by taking the head-to-head having lost by seven points in the first meeting with both sides 2-2 heading into the February window.

.@agolaseni was on FIRE in the first half with 18 points on 8/12 shooting for @gbbasketball vs Montenegro! 🔥🇬🇧🏀#BritishBasketball

Gabe Olaseni put on a clinic in the paint with 28 points and eight rebounds with Myles Hesson adding 15 points, while Luke Nelson had 13 points and five assists.

Both teams settled into a fast pace early and Montenegro had the early edge with a five-point lead at 7-12. However, GB responded with a 10-0 run with eight points from Olaseni to move to 12 points without a miss, while Hesson’s dunk had put his side ahead.

When you've got a wide open dunk but choose not to flex on 'em! 🇬🇧🏀@myleshesson #BritishBasketball

GB were far more alert on the defensive end; reading passing lanes and converting at the other end with Tarik Phillip making an immediate impact off the bench before the lead hit double figures at 25-14.

Phillip’s three gave GB a 28-19 advantage after 10 minutes with the ball movement providing nine assists in the quarter for 73% shooting – in a stark contrast to Friday’s opening against France.

Montenegro closed to within two points at 30-28, but once again GB found success inside with Olaseni to keep them at bay. Both defences stepped up, forcing opposing 24-second violations and GB would head into the half-time break with a narrow 40-37 advantage having been held to 12 points in the second.

GB opened the third on a 9-0 run with Nelson hitting another three, but more importantly continued to stand firm on defence as they kept their opponents to single figures in the third period with Phillip beating the buzzer for a 55-46 cushion.

Despite Montenegro trying to mount a fourth quarter comeback behind Nemanja Djurisic, it was too little too late, as GB held on to secure the victory.

– Starters: Okereafor, Nelson, Mockford, Hesson & Olaseni
– Kareem Queeley made his debut, replacing Rex Pflueger in the 12
– France beat Germany earlier on Sunday to move to 3-1 in top spot
– GB face Germany and France in the final window in February