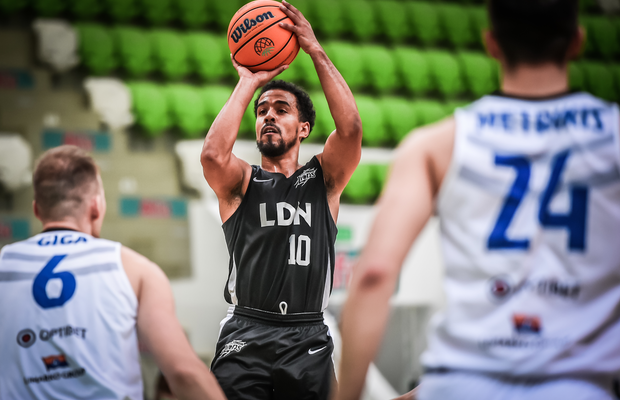 Vince Macaulay’s side were bidding to become the first British side to win in Europe in over a decade and had a five-point lead in the final quarter before coming up short as a ‘no-call’ went against the Lions.

Matthew Bryan-Amaning top scored with 16 points and nine rebounds off the bench for the Lions with Justin Robinson adding 13 points and Byron Mullens also in double figures with 10 points.

Kevin Ware followed with some impetus with a one-handed dunk on the break, but the Lithuanian side would take their first lead on a three at 8-7 after Kervin Bristol picked up two early fouls as part of an aggressive start on the defensive end.

Robinson hit back with a corner three for an instant reply and the GB guard turned provider as Byron Mullens scored his first points of the game. The former NBA centre scored his next points from beyond the arc to halt a 14-4 spell from Neptunas as they edged into a 24-21 lead after 10 minutes.

Five straight from Robinson cut the lead back to a single point, but Neptunas maintained advantage as they attacked the basket and limited the Lions on the other end. The bench stepped up defensively with Andre Lockhart and Dirk Williams also connecting on the break, while Bristol created second-chance points through multiple offensive rebounds.

Neptunas spurned several open looks from outside and were held to 37% shooting from the floor as they took a narrow 40-38 advantage into the half-time break. The Lions gave minutes to all 12 players on the roster with 12 fouls committed and a slight edge on the battle of the boards.

Both teams struggled to find their rhythm offensively as the second half began and fouls again caught up with the Lions as Bristol picked up two more with his fourth coming three minutes into the third.

Mullens kept his composure after being dragged into a tussle with Klaidas Metrikis – resulting in an unsportsmanlike for the Lithuanian – and knocked down the ensuing free throws before setting up Bryan-Amaning for a reverse dunk as momentum returned to the Lions.

Points were hard to come by, so a 5-0 Neptunas run felt more significant than usual — as was the reply from captain Joe Ikhinmwin in drilling a much-needed three to keep his side in touching distance.

The Lions found success inside with Bryan-Amaning and his score in the final minute of the third was followed by Ware going coast-to-coast to level up the game at 54-54 to set up a huge fourth quarter.

Ikhinmwin’s back-to-back baskets at the start of the fourth provided the Lions with a spark as they moved ahead for the first time since the opening period. The defence picked up again with the Lions forcing crucial turnovers from their opponents.

Captain @Jicanwin taking over with the tough and-1 finish! 💪🇬🇧🏀 pic.twitter.com/F1NlXInhYd

A five-point gap approaching the five-minute mark was soon wiped out as Neptunas showed signs of renewed life with an 8-2 stretch to re-take the initiative at 66-65. A huge three from Metrikis extended the run as points began to elude the Lions at the worst possible time.

Down 71-65, Robinson’s three took a favourable bounce off the rim to halve the deficit and the Lions soon levelled with 44 seconds remaining as Williams connected with the corner triple following a vital stop.

Norbertas Giga made a pair of free throws after being sent to the line with 17.6 seconds left and the Lions’ chance to draw back level was denied by a tough no-call on MBA and the Lithuanian side were able to ice the victory.

No foul on @MBALIVE11 ?!?! Very disappointed with how that finished! Fellas played their hearts out but we got unlucky with a missed call! @London_Lions great job men!! Keep progressing British Basketball!!!

No BCL regular season for the Lions as they now drop into the FIBA Europe Cup, which has been delayed for a January start.