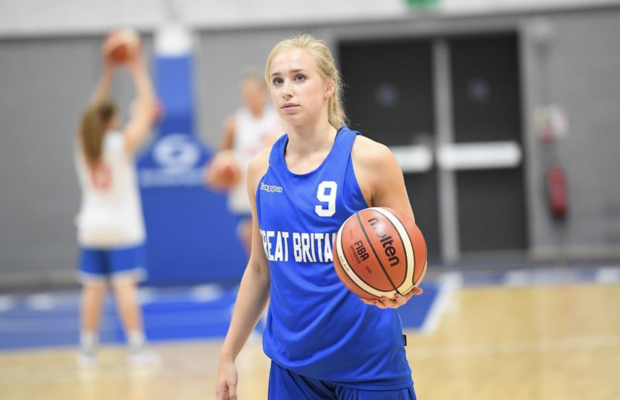 Abby Lowe will make a competitive return to basketball after a near two-year break from the sport after signing with Newcastle Eagles.

The former GB Under-20 guard will combine playing with studying for a master’s degree having graduated from San Diego State in three years.

Lowe spent the first two years playing for SDSU but endured a difficult time that affected her mental health as well as her love and enjoyment of the game – something she hopes to find again with the Eagles, whilst reuniting with head coach Chris Bunten.

“I’m very grateful to Chris for the opportunity,” she told Hoopsfix. “I wanted to come back and play basketball and enjoy it again, being part of a team environment that is family orientated.

“With COVID, I wanted to get a master’s and prolong my education so that was also a big factor.” Coach Bunten commented: “Abby is incredibly versatile and she’s a great shooter. She defends the ball very well and I enjoyed working with her at the GB Under 20s camp a few years ago.

“It’s fair to say she fell out of love with basketball for a while but it’s my job to reignite her passion and untap her potential.”

Lowe spent an extra year in San Diego – only playing basketball recreationally – and with her flight home delayed several months, only arrived in Newcastle in the past week.

The 22-year-old has already begun practice with her new team and is looking forward to getting back up to speed for the new season.

“The little things like ball handling can take some time to catch up, but it felt really good and I’m excited to see what the level is going to be like.

“I hope the team does really well this season and personally, I just want to love playing the game of basketball.”

Lowe played for Barking Abbey during the first two seasons of the WBBL – also winning a WEABL Championship – before heading Stateside and will come up against her former side this season with Mark Clark still at the helm.

Newcastle have already confirmed the return of Rachael Bland for the upcoming campaign as well as European duo Mante Kvederaviciute and Lisa Koop.