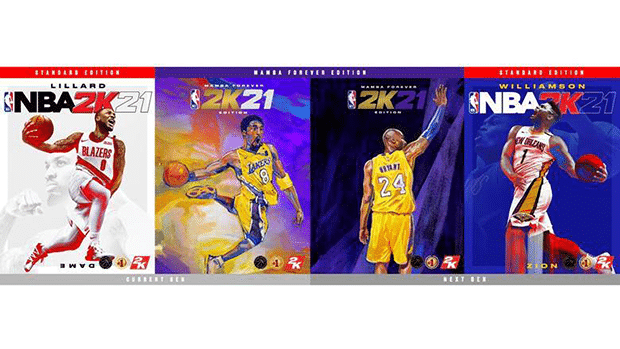 Damian Lillard, Zion Williamson and Kobe Bryant have been unveiled as the cover athletes for NBA 2K21, the next iteration of the top-rated and top-selling NBA video game simulation series of the past 19 years.

Lillard gets the cover of the current-generation version of NBA 2K21, Williamson lands the cover for the PlayStation 5 and Xbox Series X version and finally, NBA legend Kobe Bryant’s lifetime achievement of basketball excellence is celebrated in the Mamba Forever Edition.

“Each of our cover athletes represent different eras of the game of basketball – Damian Lillard dominates the court today, Zion Williamson is a standard bearer for the next generation of NBA superstar and what more could be said about Kobe?,” stated Alfie Brody, Vice President of Global Marketing at NBA 2K.

“Three athletes representing the current, future and storied history of the game. Today’s exciting announcement is just the first of many for NBA 2K21; it’s going to be a huge year for basketball fans and NBA 2K gamers.”

NBA 2K21 will be available on current-generation platforms on September 4, 2020 and is available for pre-order today; it will also be available on PlayStation 5 and Xbox Series X as a launch title this holiday.

“We’re combining all of our experience and development expertise to craft the best game possible and for PlayStation 5 and Xbox Series X, we are building the game from the ground up to take full advantage of next-gen power and technology.”

This year, NBA 2K21 will offer two editions of the game on digital and physical formats – standard and a special Mamba Forever Edition.

A full breakdown of pre-order details is available at https://nba.2k.com/.

Looking ahead, NBA 2K will be releasing additional announcements and news about NBA 2K21 including the soundtrack reveal, first looks at gameplay and features for both current and next-generation versions of NBA 2K21, 2K Day celebration and much more.