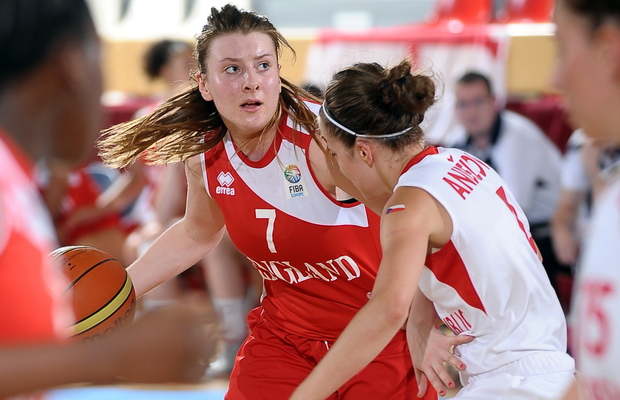 The Under-16 European Championships offer most young players their first real experience of international basketball. And, for 1996-born guard Leah McDerment, it was an experience she embraced for four consecutive years.

From being called-up as a 13-year-old to leading the team as captain in Division A and a historic promotion in between, McDerment created a lot of memories, though it is the ones away from the court that stand out. “What immediately comes to mind isn’t the basketball itself,” reflects McDerment. “One of my favourite things about the national team experience is forming a bond and friendship with girls
that would otherwise be your rivals in regular national league play.

“Still to this day I have great friendships with a lot of my old teammates, so when I look back on those experiences, that’s the first thing I think of.”

“At the time, I don’t think I was quite aware of how crazy it was to play four back-to-back U16 European Championships. I remember feeling really proud just because I knew that I was younger age wise, but that wasn’t really at the forefront of my mind.

“We would always be on the FIBA website looking at the other teams and players. I would look for other players that were my age – there were only a few and so then year after year, we would turn up and get to compete and see how we had improved as we got older – that was really cool.”

In 2009, McDerment feared missing out on the tournament having sustained a minor ankle injury in practice a week prior, but the Stockport-born guard was handed her chance at the age of 13.

Despite being three years younger than the majority of players in the competition, McDerment held her own; scoring a best of 15 points in a win against Luxembourg and finishing with respectable averages of 6.9 points and 4.0 rebounds per game.

“I was just happy to be there,” she admits. “The fact that I was getting so much court at this level was an achievement in itself.

“We had a game against the Netherlands early on in the tournament and they were a really strong team that year, I just remember being so out of my depth and feeling like ‘Ok, I just cant hang with these older girls in this one’.

“Being younger than the other girls I hadn’t experienced some things they had – for example the first time I flew on an aeroplane was with the national team and even staying away from home for training camps at first was scary for me.

“My team-mates being consistently older than me each year meant that I grew up more quickly, became more independent and mature. I think those experiences are what gave me the confidence to be able to move to Barking Abbey when I was 16.” McDerment retained her place in the final roster 12 months later alongside ’95 borns Shequila Joseph and Cheridene Green who would play more prominent roles in the push for promotion.

A semi-final defeat to Hungary left one final shot at a rise to Division A for England, but they came up short against Portugal in which McDerment contributed 13 points in a full 40-minute effort.

The core group of the roster re-assembled in Romania in 2011 with Joseph, Green and Jay-Ann Bravo-Harriott averaging double figures in scoring, while Janice Monakana neared a tournament double-double average and McDerment put up 7.6 points per outing having logged the most minutes.

“This was by far my favourite year,” enthuses McDerment. “By this tournament, a few of us had already been together for a couple of years and had formed solid friendships, so not only was I able to play with girls that I loved, we were really good too.

“I remember that tournament feeling different to others; usually you are in the hotel looking at the top teams that are likely to be promoted, putting stats to faces as the players walk past you at dinner, but this year that was us.

“We’d had streaky tournaments the years prior, but now it was like we finally clicked and were competing at a really high level.” England split their opening two games of the competition before picking up momentum in the next phase with wins over Latvia, Portugal and Ukraine. McDerment scored a personal best of 17 points in a quarter-final victory against Romania before her side clinched promotion by beating Latvia for a second time in the last four.

“Making it all the way to the Championship game was amazing, the arena was packed and playing against our rivals Germany was always an intense game.

“That year it seemed we had become a notable favourite and it felt like every other team in the tournament was rooting for us, so the atmosphere was great.

“To compete in a game like that, on that stage and get the team promoted to Division A for the first time was such a proud moment for all of us.”

In 2011, England 🏴󠁧󠁢󠁥󠁮󠁧󠁿 Under-16s made it all the way to the Division B, European Championship final! 🥈 #BritishBasketball #Hoopsfix #FIBAU16Europe

The first venture into Division A action came in 2012 for England with McDerment using her experience in a leadership role with a roster including 1998-born Savannah Wilkinson.

McDerment led the team in scoring with 9.8 points per game with a best of 17 points coming against Czech Republic, though England were unable to pick up a win in heading straight back to Division B.

“Every year was just so different from the next, I was definitely more comfortable with the tournament environment and playing on that stage, it wasn’t as daunting as it was the first time.

“At first, it was definitely a culture shock, from the hotels to the facilities we were playing in, it was all very new. By the third and fourth years, I knew more of what to expect which made it a much smoother process.

“When I was captain, I had a lot more experience than the rest of the team which meant that not only was my leadership role expected by the staff but I felt it was anticipated by my teammates too. The change in role came quite naturally to me.”

McDerment played a total of 33 games across the four years for England and while victory over Germany in the 2011 final would have been a special feeling, the chance to explore more beyond basketball is something she reflects on.

“I think one thing I would have changed would be our down time during the tournament,” she concludes. “During my years with the national team, rest and reduced activity during down-time was highly encouraged, for obvious reasons.

“I think that we would have benefitted mentally as the tournament went on if we were able to do activities that weren’t solely related to basketball performance and I think we are now more aware of how much of a role mentality and mindset plays, especially in adolescents.

“The tournament can be gruelling so rest is crucial, but I think it is important that with the younger age groups, they also get a full cultural experience that they will remember later on in life.”

McDerment went on to spend four years at NCAA Division 1 school UMass and was averaging 9.7 points per game this season in Germany for second division side Falcons Bad Homburg.

With no European junior action this summer, we are looking back on the British Basketball age groups, starting with the Under-16s with video action, all-time statistics and an All-Decade Team.