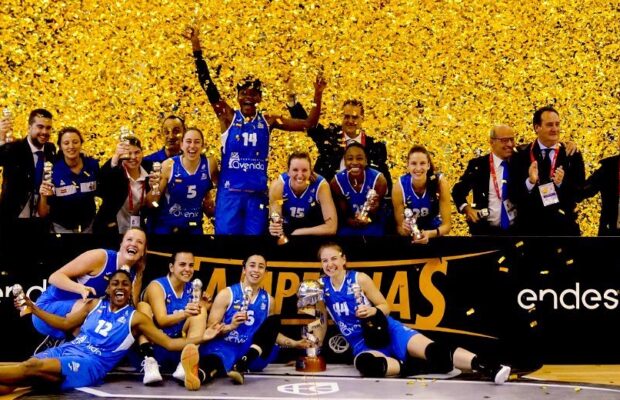 The three-day tournament in Salamanca resulted in a 74-58 victory for Avenida over close rivals Girona.

Fagbenle recorded 11 points and four rebounds in the title-clinching win, while Samuelson added four points from the line in a 12-minute cameo. The GB guard scored eight points in the opening victory with Fagbenle scoring 13 points on 6 of 8 shooting before adding seven points in the semi-finals.

What a ride 😌🙏🏿We made history by being the first HOST team in decades to win the Copa de la Reina (Queen’s Cup)! On International Women’s Day, no less! We were definitely on a mission 😈😤 we all showed up and showed out, ESPECIALLY our most deserving MVP of the tournament, @tiphayes3 !! 💪🏿It was an electric atmosphere made possible by our amazing fans of Salamanca. Thank you all for your hardcore support. •••••••••••••••••••••••••••••••••••••••••••••••••• Thank you to my sis @torerafagbenle for being in Spain with me and making it for this moment and many before this! You’re my Beb forever. Thank you to my love for his love and for not having Instagram 🙏🏿 thank you MM and @davidbuer for fixing my body 3 years ago. Though I’m not swole any longer 😔, I have no knee pain and I’m able to play pro ball thanks to the work we did. Thank you @hoopsamerica for unknowingly being with me in my head every time I step on the court 👊🏿💪🏿❤️ hungry for the next challenge 👀👹 Enjoy the pics! #sothankful #internationalwomensday #copadelareina #queenscup #salamanca #cbavenida #campeones #champions 8/3/2020

Fagbenle is an WNBA champion with Minnesota Lynx and also had success in Poland with regular season and playoffs glory with CCC Polkowice – also picking up an MVP award.

There could be more silverware ahead for the British duo as Avenida lead the way at the top of the league standings in Spain, whilst also competing in the quarter-finals of EuroCup Women.