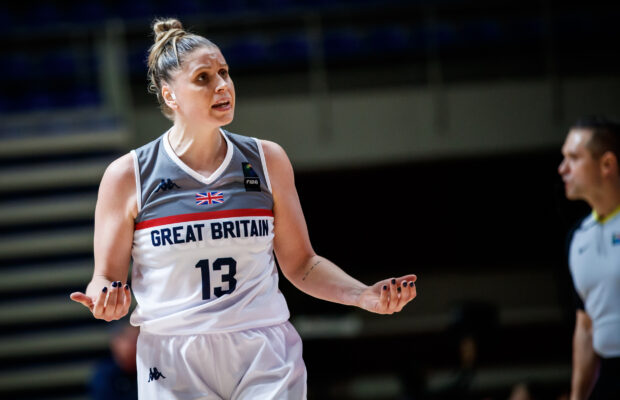 Jo Leedham-Warner has revealed she is unsure on her international future after Great Britain’s Senior Women missed out on a place at the Tokyo 2020 Olympics.

GB suffered three defeats from three in Belgrade – most notably a 79-82 loss to Korea on Saturday – to finish bottom of one of the four Olympic qualifying tournaments.

I’m absolutely devastated.if u know me u know i’m straight and direct. I’m not happy with what we achieved or just getting this far.I EXPECTED THIS. I EXPECT GREAT THINGS OF MYSELF EVERYTIME I STEP ON THE COURT ESPECIALLY IN A GB 🇬🇧 VEST.this will hurt for a while.

Leedham-Warner averaged an impressive 18.3 points, 7.7 rebounds and 7.3 assists over the three games, never wavering in effort having logged a combined total of 111 minutes on court – summing up her years of dedicated service to the national team.

“I don’t know what the future is for the team,” she said, via BBC Sport. “Potentially this is probably my last game for GB, I am not sure I will suit up again, to be honest. I need to have some chats with my family.

“I have a husband, I play overseas all the time trying to make money doing what I love and it’s hard to have a family life.

“I’ve achieved everything, I don’t know what’s left to achieve. This was the moment to go to Tokyo and we didn’t achieve that. I don’t know what else is really for me with GB so I think it might be the best way to step out.”

The ultimate warrior for the GB cause, a true leader and inspirational role model – not just for the next generation, but her team-mates also. Leedham-Warner has given everything for the GB jersey and her passion and commitment was evident once more in Belgrade, despite falling short of the ultimate goal.

The 32-year-old became emotional in the post-game press conference following the opening defeat to China; lamenting British Basketball as ‘a shambles in the UK’ before explaining just how much it meant trying to make it back to another Olympics – after suiting up at London 2012.

"If we can just inspire the next generation & inspire British people in general to get on to this sport that we all love so much…that would be the prize in itself, obviously along with the ticket to Tokyo!" An emotional @joey_leedham13 speaks from the ❤️ at the #FIBAOQT

It goes without saying, the loss of Leedham-Warner on the team would be a massive blow for GB. Emotions can run extremely high in sport, particularly after tough losses and there will no doubt need to be a period of reflection.

GB are next scheduled to be in action in November when they resume the Women’s EuroBasket 2021 qualifiers having started 1-1 in their three-team group.