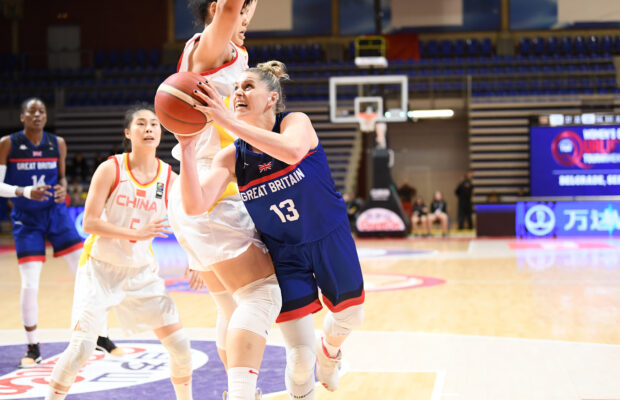 Chema Buceta’s side need to secure a top-3 finish in the group in order to fulfil their Olympic mission and make it to Tokyo 2020 having earned a shot with a fourth place finish at EuroBasket last summer.

The challenge remains and with European champions Spain to come on Sunday, their next encounter with Korea becomes one they cannot afford to lose.

Down, but not out. The bigger picture remains.

Temi Fagbenle top scored with a game-high 26 points upon her first return to the Serbian capital since earning a spot on the All-Tournament Team at EuroBasket. Jo Leedham-Warner was instrumental with 19 points, five rebounds, six assists and three steals in a typically determined effort.

A block from Cheridene Green on the opening possession was followed by a drive to the basket from Leedham and a mid-range jumper from Fagbenle – all common themes from the historic run last summer.

Fagbenle found more success inside with Green continuing to battle away under the basket before picking up an early second foul as Hannah Shaw checked in as GB searched for their first advantage.

The bench provided the spark from 3-point range with the dual threat of Chantelle Handy and Janice Monakana helping close the gap. Handy followed with another from deep to push GB ahead for the first time and quickly followed suit to increase the advantage.

Leedham-Warner drove to the basket with ease to beat the buzzer as GB established a 26-21 lead after 10 minutes.

The gap was eight points early in the second as Fagbenle moved into double figures, and even as China responded, they were kept at bay. Leedham-Warner joined her team-mate in double digits with another late score to make it 46-43 at half-time.

Fagbenle continued to be the focal point of the GB offence with 14 points on 13 attempts with her side shooting above 57% from the floor going into the interval with their opponents just under 60% inside the arc.

China were quick to restore their first lead since the opening quarter and while GB hit back through the perseverance of Leedham-Warner – who scored seven points in the period to move to 19. A 14-4 spell from China proved pivotal as they took control with a 65-59 advantage ahead of the final 10 minutes – it would have been three more, but for a video replay ruling out a half-court heave.

Fagbenle opened the fourth with back-to-back scores, though GB soon found themselves behind by 10 at 74-64. A 5-0 response kept hopes alive with GB within five points once again inside the final three minutes.

China closed out the victory with GB unable to keep the margin of defeat in single figures, which may prove crucial if head-to-head comes into play. That will be irrelevant if GB cannot pick up a win, and they rest up tomorrow before a crunch clash with Korea on Saturday.

– This was GB’s first action of 2020 having last played against Belarus in November
– GB’s starters were Vanderwal, Samuelson, Leedham-Warner, Green & Fagbenle
– Kristine Anigwe was a DNP on her senior debut for GB after representing USA as a junior
– The group was moved from Foshan to Belgrade due to the coronavirus outbreak
– Stef Collins, Eilidh Simpson absent from the squad with injury
– GB’s next game is against Korea on Saturday at 1:30pm UK time