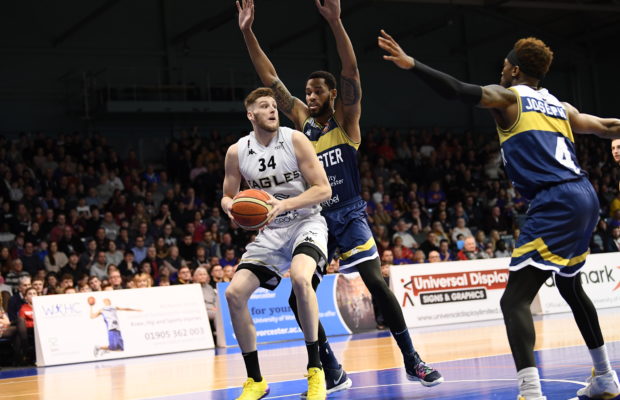 Week 19 of the 2019-20 BBL Power Rankings as we continue to assess each team on a weekly basis leading up to the end-of-season showdown at The O2 for the playoffs final.

The top three teams in the league standings were all beaten on the same night last week with 8 of the 11 teams separated by just two defeats.

Bristol put their Cup final defeat behind them as they outlasted Cheshire for a gruelling 98-94 triumph in double overtime. Gentrey Thomas was instrumental with 32 points, 16 rebounds and five assists in one of the stat-lines of the season with Levi Bradley weighing in with 27 points off the bench to level up their league record.

The Flyers have won four of their last five in all competitions and are back on the road to face Glasgow on Friday at the Emirates Arena – a place they will hope to heading to in March if they overcome Solent Kestrels in the semi-finals of the Trophy. The first leg takes place on the road in midweek.

They never gave up! 💪

All the key moments from Saturday's double overtime thriller against Cheshire Phoenix. pic.twitter.com/AaER0ZyDvw

A first loss for the Lions since their Trophy exit as they dropped to 7-2 in the league after going down against Leicester on the road. They hit back in the third after a slow start, but the damage had been done in the first half, setting the tone for the seven-point defeat.

Ovie Soko led the resistance with 21 points and nine boards with the visitors giving up 60% inside the arc and they now face another challenging road trip by taking on Newcastle. They are also back in action on Wednesday when they host Cheshire with the chance to extend their lead at the top of the standings.

The momentum is with the Wolves right now as they followed up their Cup success with an impressive 77-72 victory at home to Newcastle. There were double-doubles for Jordan Williams and Amir Williams as the hosts overturned a half-time deficit to get the job done in the second half.

Worcester joined Newcastle on five wins from eight in a tie for third spot and they head to Sheffield for the first time this season, looking to continue their winning run – having now accumulated 14 victories this season.

Leicester finally ended a run of four straight defeats two weeks ago and backed up that result with another confidence boosting success as they defeated London 83-76. They doubled up their opponents 20-10 in the opening period and never looked back on their way to victory.

Corey Johnson hit some big threes in the first half during his 18-point display with BBL Cup dunk contest winner Namon Wright adding 17 points, while Jordan Spencer handed out nine assists against his former club. The Riders go up against Surrey away from home on Saturday as they aim to continue their climb up the table.

The atmosphere at the @LeicesterArena last night was amazing. Thanks @RidersBball fans bring that energy again for the next game. 👍🏻 pic.twitter.com/vAg5Gm4Bah

Glasgow have now played seven straight games on their home floor, winning four of those contests. Their third defeat came last week as they were beaten by nine points by a Plymouth side able to celebrate their first league victory. The Rocks had wiped out a double-digit deficit at half-time with a surging run in the third, but a lapse final quarter saw them fall short.

Ali Fraser had 20 points, 10 rebounds and five assists in the loss as Glasgow missed the chance to go level at the top after the Lions were also beaten. They have still not played on the road in 2020 and that doesn’t change this week as they take on Bristol in the league on Friday.

Cheshire have now won four of their last five games after splitting their recent double-header. Ben Thomas’ side endured another double overtime thriller, but this time came up short away at Bristol in the league before bouncing back to defeat Sheffield 83-78 having led by as many as 25 points.

Four players were on court for 40+ minutes in the double OT defeat with Ben Mockford limited to nine minutes before missing the win over the Sharks as Jalen Hayes poured in 28 points from the bench. They continue their Trophy run on Sunday as they host the first leg against Newcastle – who they beat convincingly last month – before heading to the Copper Box to face the Lions in midweek league action.

Newcastle were the third team of the top three to be beaten in the league on Friday night as they were on the wrong end of a close encounter in Worcester. CJ Gettys netted 22 points with Rahmon Fletcher adding a double-double including 12 assists, while there was a debut for GB international Will Saunders – previously of London City Royals.

The Eagles were held to 28 points in the second half as they lacked a decisive charge down the stretch and were joined on a 5-3 record by the Wolves. A testing weekend awaits with a home encounter with league leaders London Lions followed by a visit to take on Cheshire in the first leg of the Trophy semi-final on Sunday.

The Sharks ended their losing run in January with a hard-fought 81-76 win over Surrey on Friday night before suffering a five-point defeat at Cheshire less than 48 hours later. Connor Cashaw had 20 points in the win with Mackey McKnight adding 12 points, seven rebounds and nine assists.

They trailed by as many as 25 points in the road loss on Sunday – making the final scoreline more respectable with a second half fightback, but they now sit third from bottom in the league with just one win in their last five. Up next is a home clash with the Cup champs Worcester on Friday.

The Scorchers are still yet to win away from home in the league after suffering a fourth road defeat, despite pushing Sheffield close. They eventually went down to a five-point loss with Lovell Cook leading the visitors with 18 points with Matthew Bryan-Amaning straight into the lineup with 10 points on debut.

Surrey have a double-header this weekend with a trip to Plymouth on Friday night before returning home to welcome Leicester on Saturday having gone 4-1 at Surrey Sports Park in the league so far.

Plymouth finally broke their league duck as they recorded an impressive 67-76 success away at Glasgow. Having led by 10 at half-time, the Raiders survived a storming third quarter from the Rocks as they took the final period 24-12 to seal a long-awaited win.

Leslee Smith top scored with 17 points, while Will Neighbour neared a double-double on debut and Plymouth also had the key returns of Josh Wilcher and Rashad Hassan. They return home on Friday night to face a Surrey side that have struggled on the road so far this season.

Another weekend off for the Giants as they continue to build ahead of their return to action against Sheffield on 16th February. They return to the foot of the rankings following Plymouth’s win last weekend, while the club also announced a change of ownership this week with Jamie Edwards taking over.