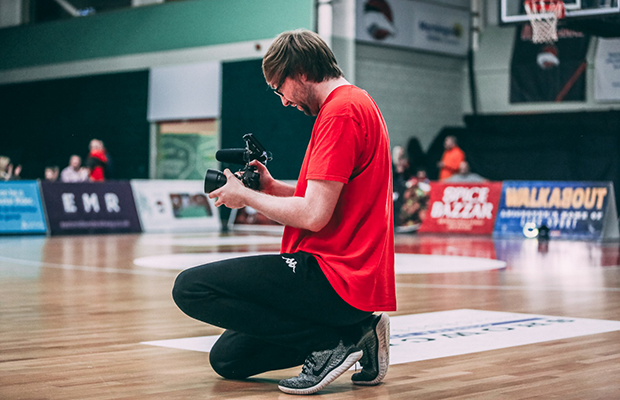 Leicester Riders’ digital content specialist Joe Pinchin has been hired by the Chicago Bulls as their new Manager of Digital Content.

Pinchin, 31, widely known as one of the hardest workers in British basketball, announced the news on social media this afternoon. He accepted the job at the end of last year but had to wait on visa approval before being able to confirm the move.

“I am of course super excited to join the Bulls Digital department,” Joe told Hoopsfix when reached out to for comment.

“I’ve known some of the staff, through social and being at some similar events, and followed their great work online as a source of inspiration for years. To soon be part of the team that is behind the work is incredibly exciting and after years of wearing a lot of hats to ensure the club functions here I am thrilled to lock in and focus on digital full time in the best sports league in the world.”

It’s been a mad journey over the last decade involved with @RidersBball.

Thankful & proud of the hours put in alongside some awesome people to move things forwards.

Next up… @chicagobulls! Hyped & grateful for the opportunity to now join some crazy talented people!#smsports pic.twitter.com/ILJbynqZke

Having been involved with the Leicester Riders and Loughborough basketball programme for over a decade, Joe has performed almost every role imaginable with the club; playing and coaching, then taking over operations before getting more and more into the digital communications side of things.

Honing his craft over a number of years, getting competent with both photography, videography, editing and motion graphics, along with all the associated Adobe Suite software, Joe has grown the programme to have the best digital presence in the UK, whilst also freelancing with the likes of GB Basketball, Deng Camp, FIBA 3×3, along with the Hoopsfix All-Star Classic.

“It’s been an awesome decade or so involved in British basketball off the court,” Pinchin added.

“I’ve always loved the game and felt like I could carve a career in hoops, adding value by putting in the hours and learning from some of the great people we have in the game here. I’m pleased to have worked with some amazing people over the years, that have produced a ton of success for the club on the court and executed an incredible transition of growth off the court.

“I feel I have always tried to learn daily and the open nature of people in sport makes it so easy to soak in tons of information and then execute against it.”

During his tenure, the Leicester programme won over 57 national titles from across the BBL, to the NBL, BUCS and college leagues.

Hoopsfix wants to wish Joe all the best with his NBA career!

@ridersbball ➡️ @chicagobulls . It’s been a crazy journey so far but next week will be my last working in Loughborough after 7 years working & 13 years involved as player, coach.. and well pretty much every role in our club you can imagine. I’m proud of the hours put in and my contributions to moving our programme, and others, forwards over the years. Massive thanks to anyone that has made the last decade so memorable and huge thanks to the staff at the Bulls for the opportunity to join a team of incredibly talented people. Hyped for the next chapter, the grind continues in the Windy City! #smsports #BritishBasketball #RunWithUs #RiderUp #WhereHistoryBegins