The second month of the college season is completed with the 2020 action already underway, so we look back on how the top Brits got on in December:

Akwasi Yeboah began to heat up for Rutgers (10-3) last month with a season-high of 17 points at Michigan State followed by a run in the starting lineup. The graduate student collected eight rebounds in successive games with the second coming alongside 14 points before finishing the year with 11 points in 15 minutes.

Amin Adamu started December with a career-high of 19 points for Montana State (8-5) in a 77-70 win over South Dakota State before repeating the feat in the next game against North Dakota State. Fellow Brit Jubrile Belo had 14 points in the loss before closing out 2019 with a season best of 18 points on 7 of 11 shooting followed by 17 points in consecutive wins for the Bobcats.

Frey to Belo and JB with the two handed flush!! pic.twitter.com/AwFPAEZgrq

Dan Akin reached double figures in four of seven games for UMBC (7-8) during December with 13 points on two occasions including with a perfect 6 of 6 shooting in an 89-57 victory to close out the year. RJ Eytle-Rock set a season-high of 12 points in his return from injury in a 35-minute effort with seven rebounds and six assists along with two steals in an 86-77 win against Coppin State.

Freshman Tosan Evbuomwan reached double figures for the third time this season, tying his best of 10 points to start the month as Princeton (4-8) were beaten 76-82 at Drexel (8-7) with Mate Okros scoring four points in the win.

Okros went on to put up his career-high of 14 points including four triples without a miss to help his side to a 72-63 win over Quinnipac. Shaquille Walters posted a first double-double with 12 points and a career-high 12 rebounds in a 72-88 win for Northeastern (8-6).

Kayne Henry netted 16 points in a tough 67-62 loss for Jacksonville State (5-8), though earned himself a return to the starting lineup with 14 points in his next outing. The junior wing collected 10 rebounds for the first time at Tennessee and finished the month with nine points in 17 minutes of a crushing 120-56 win. 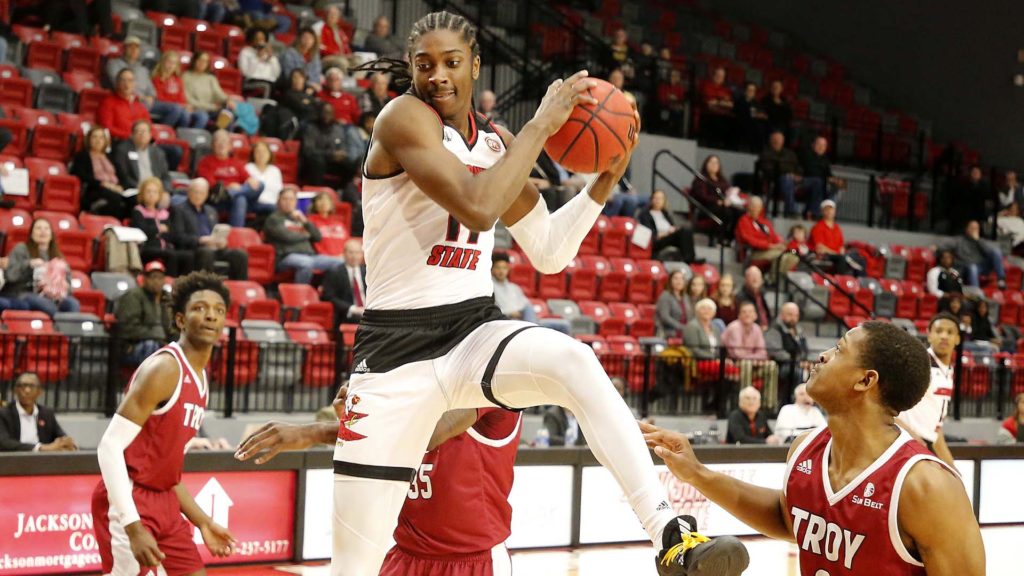 Anumba followed with eight points in the next game before another nine-point display later in the month along with six rebounds in beating SIUE 93-73.

Junior forward Robinson Idehen closed out 2019 with season bests of 10 points in consecutive wins for Santa Barbara (10-4), while Sam Japhet-Mathias registered eight points and eight rebounds against UCLA as part of an eight-game losing run for San Jose State (5-10).

Aaron Menzies started December with a season best of 10 points along with six rebounds as Saint Mary’s College (13-2) maintained their strong start to the season with the redshirt senior also scoring nine points against Dayton.

Caleb Fuller scored nine points for UC Davis (5-10) in a win over Northern Illinois, while team-mate Ade Adebayo recorded his season-high of six points without a miss in 20 minutes at San Francisco.

Freshman centre Harry Morrice enjoyed his best display of the season to end the year on a high with 3 of 3 shooting from downtown for nine points along with five rebounds for North Carolina A&T (3-11).

Meanwhile, Boban Jacdonmi missed most of the month due to injury before making his return with five points in 17 minutes for Southern Miss (4-10).

Sesan Russell continued his hot scoring streak with a career-high 36 points to lead Florida Tech to an 88-81 win over Lynn for their first conference victory on the season.

“We put the ball in Sesan’s hands tonight because we needed a veteran player to step in at the point with us having several guys not at 100%.,” said head coach Mims. “At first he was hesitant to play the role as he thought it would take away what he does for us on the scoring side but I assured him he would find a way to help us in that area whether he was at point guard or not. And guess what, he ends up having his biggest game of the year.”

The sophomore guard went 10 of 14 from the floor, whilst making 12 of 13 free throw attempts and adding four rebounds and five assists. Russell also added 13 and 16 points in his next two games before being kept in single figures for only the second time this season to close out 2019.

Gedi Juozapaitis also kept up his impressive form with a 32-point outing along with 14 rebounds followed by two more double-doubles including 22 points and 22 rebounds at Georgia College – earning the Academy Bus Athlete of the Week award.

The sophomore wing finished the year with another 21 points to take his averages to 18.7 points and 10 rebounds per game to fuel Flager College (5-5).

Senior guard Danny Evans netted 20 points before helping Saint Anselm end a losing run of two games with a 17-point haul along with a career-high 11 rebounds in a 71-70 triumph – scoring the game-winner with 3.2 seconds left.

Jelani Watson-Gayle put up 14.3 points per game last month with a best of 17 points coming in a 62-70 win for Miles (7-3) with a further 15 points in a loss to close out the year. Romario Spence found success in opposition with season-highs of 15 points and eight rebounds coming in 38 minutes for Montevallo (8-4) as they fell to a 72-60 defeat at Miles.

Jonathan Brown started the month with back-to-back PacWest Freshman of the Week awards at Fresno Pacific (3-8) with the freshman netting 14 points on 6 of 7 shooting before scoring nine points off the bench.

Sean Nealon-Lino’s best in December came in his first game off the bench with eight points and five rebounds, while Alex Ferguson doubled his best scoring tally with six points to go with 10 rebounds in the final game of the month.

Senior guard Evan Walshe was inserted into the starting lineup for the first time this season in December, opening with 14 points against Lynn to start a run of four straight games in double figures as Barry (9-2) went unbeaten through the month.

Adria Amabilino-Perez made it three games in a row in double figures to follow on from November with 11 points in 5 of 6 shooting in a 72-58 win as Bentley (10-2) enjoyed another strong month.

Josh Apple scored 10 points twice during the month and also collected 14 rebounds to go with six points in a 74-79 road win for East Central University (9-1). Senior guard Andre Arissol’s best of December came at Notre Dame de Namur with 14 points for Chaminade (6-4) to maintain his scoring average in double figures heading into 2020.

Joel Ufele is averaging 11 points per game on the season having started the month with 11 rebounds before scoring a best of 12 points along with seven boards and four assists for Mercyhurst (5-4).

Ola Ayodele recorded bests in points, rebounds and assists for Midwestern State (1-9) with 14 points – on 6/6 shooting – along with five rebounds and three assists in 33 minutes of his second start.

Junior guard Sam Van Oostrum handed out 10 assists to go with eight points in a 132-62 win for Franklin Pierce (7-4), while Callan Low recorded six points, three rebounds and three assists for Newberry (7-4) to earn a first career start in the next game.

See the full list of British players in US colleges HERE.