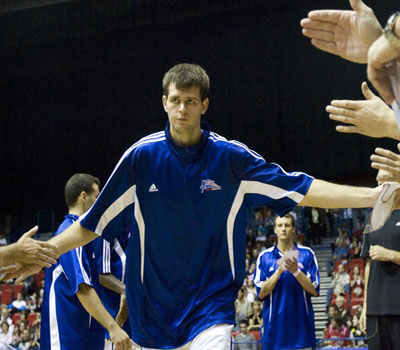 There was a remarkable return to action for Kyla Nelson in December, just three months after undergoing cancer surgery. The former GB Under-20 guard had three points and two assists in 12 minutes of her comeback game against Miami, though Pitt (3-9) head into the new year having lost five games in a row.

Monique Esbrand reached double figures with 11 points in the win at Pitt in Nelson’s comeback game before scoring 10 points in her first start as Miami (7-5) defeated Tiffin 83-51 to close out 2019 on a three-game win streak.

Hannah Jump continued her hot streak from downtown with three triples for nine points in a 71-52 win over Ohio State before adding eight points in a 78-51 victory against #23 ranked Tennessee, though Stanford (11-1) did suffer their first loss on the season at Texas.

Despite not picking up a win in December, Khaleah Edwards had another strong month at Wagner College (4-7). With 14 points in an opening defeat, Edwards followed with 13 in coming up against Maya Hyacienth – who netted a season best of six points as Rider (7-2) won all four games in the month.

The junior forward then fired in a game-high 21 points along with seven rebounds and four assists with Wagner falling to a 58-74 loss against Colgate as they hope for a fresh start in 2020.

Holly Winterburn caught fire for Oregon (10-1) in a big win against South Dakota State with 17 points on 5-of-7 shooting from 3-point range to earn the Pac-12 Freshman of the Week award.

“I just felt like I was taking the right shots,” she said. “We shoot everyday so when we are in rhythm – like KG says, if it’s a rhythm shot it doesn’t matter where the defense is, just take it, and they went in today.”

The sharpshooting guard then recorded nine points and two steals in each of the next two wins as the Ducks brushed aside Long Beach State and UC Riverside in an unbeaten month.

UCF (8-4) lost their opening game in December before responding with four straight wins as Georgia Gayle averaging 8.0 points per game during the period, logging heavy minutes as a starter with a best of 11 points coming in a 69-53 success over Wright State.

Jenelle Grant also had a busy month with Purdue (11-3) finishing with four straight wins including back-to-back conference victories in the Big 10 with the redshirt junior adding four points in the 50-66 win at Ohio State. Meanwhile, Gabby Nikitinaite ended a scoreless run of three games with five points off the bench against Southern Illinois as NIU (4-7) went 1-3 in December.

Loren Christie had four points and nine rebounds in a 36-46 win for Buffalo (9-2) at St Bonaventure before missing their next three wins, while senior Mollie Taylor closed 2019 with a season best of five points in a 16-point win for Loyola (3-8) in just her second appearance.

Ire Ozzy-Momodu only made one appearance for RMU (5-6) during the month and posted four points and six rebounds in a 62-69 overtime triumph, while Esther Oluade grabbed six boards herself in 13 minutes in a dominant 94-46 win for Loyola (4-11).

There was another all-Brit clash in December as Paige Robinson collected eight rebounds to help Florida (9-4) overcome Mercer (3-10) with Emily Stradling netting six points in the 71-50 defeat. Milly Knowles matched her season-high of four points, started against Kansas City before playing 28 minutes and collecting career-high seven rebounds in a conference win for EMU (2-9).

Harriet Swindells poured in a career-high of 29 points along with seven rebounds and seven assists in an opening loss in the NSU Holiday Classic before putting up 25 points, four rebounds, five assists and three steals in an 82-66 victory for Barry (2-8) to finish the month.

Team-mate Ashleigh Pink recorded a season-high of 13 points against Florida Tech before back-to-back 12-point games in the tournament including five assists in just their second win of the season.

The Brit duo also came up against another pair of team-mates during the month with Swindells scoring 17 points in a 65-57 loss against Lynn (8-4) with Dani Lozzi contributing 11 points and six rebounds in the victory. The junior guard posted bests of 13 points and seven assists in a dominant 85-38 home win, while Loie Webb hit 13 points on 4 of 5 shooting in a 66-67 victory at Florida Southern.

Macy Spinks opened the month with a 21-point outing for Saint-Anselm (7-2) to continue their unbeaten start by beating Stonehill 63-76. The freshman guard’s performance helped earn a third NE10 Rookie of the Week award of the season.

🇬🇧🇺🇸| Macy Spinks earns her third NE-10 Rookie of the Week award this season after netting 21 points in a road victory!

Sophomore guard/forward Shauna Harrison posted a career-high of 24 points along with nine rebounds to help Cal U of Pennsylvania (9-2) to a convincing 21-point win as they continued their strong start to the season. Harrison is averaging 11.3 points and 5.7 boards per game.

Charlotte Ellmore played at least 36 minutes in each of her six appearances for University of West Florida (4-8) during the last month with 20 points coming in a 66-62 win over Spring Hill to go with six rebounds and three assists. The BA alum started December with six assists and matched the season-high with another six assists in the final game of 2019.

“I think I was more relaxed today and my teammates helped me get some open shots and they really moved the ball around which helped me a lot,” said Ellmore of her 20-point outing.

Another player to put in the hard yards on the court during December was Saint Leo (5-7) senior Gina Brierley, who had a best of 12 points in a 94-52 win to open the Hampton Inn Classic. A 45-minute effort of seven points, four rebounds and five assists came in an earlier 66-72 overtime loss before eight points, six rebounds and four assists in 42 minutes followed later in the month in another overtime defeat.

Freya Cooney with a perfect 4 of 4 from the floor for eight points along with five rebounds in a big 98-42 win for Franklin Pierce (5-5), while Alix Henderson recorded eight points and four rebounds followed by six points in the next two games as Point Loma (9-2) went 5-0 in December to take their winning run to eight games.

Former Charnwood duo starred as Jessica Eadsforth-Yates tied her season-high with 14 points in a victory for Davis/Elkin (2-8) before closing out the month with 11 points in their second conference win, while Rebecca Morrison also finished with 11 points in a close loss for Caldwell College (1-10).

Shawnisay Millar backed up her first start with a season-high of 15 points for Midwestern State (4-4) in a 73-84 loss with 12 points coming in the following game without a miss. Maya Price went a perfect 8 of 8 in matching her season-high of 17 points for Eckerd (6-3) and also grabbed bests of seven rebounds in consecutive games.

Meanwhile, Sarah Round reached double figures in five of six outings for Goldey-Beacom (1-9) including 16 points at Southern New Hampshire. Dami Adekinya recorded back-to-back games in double figures with 11 and 10 points; starting in big wins for Quincy (4-5) to close out the year.