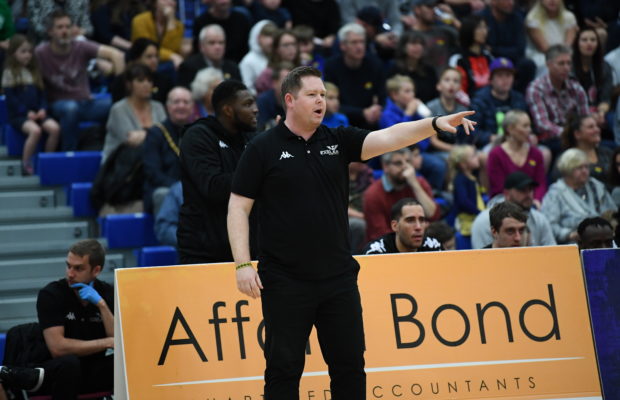 With just one more spot in the quarter-finals of the BBL Cup up for grabs, we continue to look at each of the 12 teams and track their progression through the 2019-20 season.

Newcastle Eagles and Cheshire Phoenix were assured of their places in the last eight with three teams in the South still in contention to continue their quest for silverware.

An immediate return to winning ways for the Royals. They had to survive another fourth quarter rally before overcoming Surrey in a 92-84 victory with Matt Scott pouring in another 22 points. Aside from the victory, the most pleasing thing for the team was the return of star guard Andrew Lawrence in coming up against his hometown team.

The victory also locked up top spot in the South group with Newcastle or Cheshire their possible quarter-final opponents. A double-header in the South-West is up first as Bristol and Plymouth stand in their way of a dominant 9-1 record to open their second season.

Permutations: Qualified for the quarter-finals as South group winners providing Bristol don’t win by 27 and finish level at 8-2.

The Sharks continue to look a formidable force at home as they overcame the challenge of Leicester with a 79-63 triumph giving them control of the North group. They led by as many as 25 points in the contest with Nick Lewis leading the charge with a 29-point display with Connor Cashaw adding 20 points and Bennett Koch grabbing 17 boards.

Sheffield face Glasgow in their final group game away from home on Friday knowing that another victory seals top spot with their last eight opponents still to be decided given the tight tussle in the South. But after five from five at home, they won’t be fearing anyone.

Permutations:Qualified for the quarter-finals. Top-two finish confirmed – will top the group if they win their final game.

🏀 The Sharks are unbeaten in the Tank so far this season. Can the streak continue??

The Riders are first to play their full quota of games in the group and ended on a low note with a convincing loss away at Sheffield to lose their grip on the North. They started the weekend with a dominant 93-58 win at home to Glasgow with 20 points from Jamell Anderson leading the way.

Rob Paternostro’s side dropped to 7-3 on the road against the Sharks with a fourth quarter rally helping reduce the overall margin of defeat. That sees them claim the head-to-head, but it will be irrelevant if their rivals can pick up an eighth group win this weekend. Kyron Cartwright finished with an 11-10-7 stat-line in the loss and leads the league in assists with 8.8 per game.

Permutations: Qualified for the quarter-finals. Top-two finish confirmed – will top the group if Sheffield lose their final game.

No final weekend drama for the Cheshire in order to clinch a top-four spot as that was done following Glasgow’s latest defeat on Friday. Ben Thomas and his side can keep hopes alive of emulating their success in the competition two seasons ago.

Having endured a number of injury problems and losing their first four games, a remarkable turnaround for the Phoenix and they can ensure a winning record in the group by taking their win streak to six when they welcome Glasgow in their final game on Sunday.

Permutations: Qualified for the quarter-finals. Will finish third if they win their final game AND Newcastle are beaten. If not, they will head to London City Royals in the knockout phase.

Worcester moved a step closer to securing a home quarter-final after a strong performance saw them take down London Lions 85-90 on the road in mid-week. Kofi Josephs led the way with 22 points in the win with the visitors outscoring their opponents by 17 in the second and third quarters to take control before holding on down the stretch.

Matt Newby’s side close out the group at home to Surrey on Friday with victory guaranteeing they will be back at the University of Worcester Arena to take on either Cheshire or Newcastle in the last eight.

Permutations: Qualified for the quarter-finals. Will finish second with a win in their final game OR a Bristol loss in either of their final two games. Can no longer top the group.

Newcastle are in. The defeat for the Rocks also secured their spot, and they followed that up with a comfortable win on the road against Manchester Giants. John Mitchell posted a double-double in the win with Rahmon Fletcher handing out an impressive 16 assists to lead his side.

However, a change to the roster has been made with American forward Mitchell let go, despite his promising start, though Rodney Glasgow will be able to suit up again having been made to sit out due to an issue with his passport. The Eagles close out in another fixture against Manchester with the hope of a big finish at the ECA on Friday.

Permutations: Qualified for the quarter-finals. Will finish third with a win in their final game, fourth if they lose.

The Flyers are advancing to the last eight in the Cup after splitting their weekend double-header. Bristol did have a 15-point lead at one stage against Worcester before falling short as they were held to just 10 points in the final quarter.

Gentrey Thomas top scored with 20 points in the loss as 22 turnovers harmed their chances of victory, but Andreas Kapoulas saw his side bounce back with a 64-71 success away at Surrey to seal qualification and they now have a weekend off with more time to prepare for their run-in.

Permutations: Qualified for the quarter-finals. After Worcester’s win last week, they will need the Wolves to lose their final game, whilst winning both of their own in order to sneak into the top two and secure a home tie in the last eight. Alternatively, they could still finish fourth with the Lions lying in wait behind them.

And, the Lions are back behind the Flyers in our rankings after dropping their fifth game in the South group after losing by five against Worcester at UEL. The middle periods proved their undoing as the Wolves took control and were able to ride out the storm of Dii’jon Allen-Jordan’s 31-point haul.

The Lions don’t play again until next Wednesday, by which point they may already have their place in the quarter-finals confirmed. They finish with games against Bristol and Surrey with their final clash against the Scorchers possibly being a decider for a top-four spot.

Permutations: The Lions still have their fate in their own hands with two games remaining – of which they might not even need to win either if Plymouth/Surrey suffer further setbacks. A top-two finish is no longer possible, but they could still climb into third and avoid facing the winners of the North – although a trip to Sheffield or Leicester looks no more favourable than the other.

Glasgow saw their top-four hopes come crashing down on Friday night in a disappointing 93-58 loss in Leicester to make it four defeats on the bounce. They were rocked further by Eli Pepper’s decision to return to the US, whilst the team also let Earl Russell go.

Head coach Vincent Lavandier issued a rallying statement to get the fans behind the team in a ‘difficult period of transition’ and they are back at the Emirates Arena on Friday as they host Sheffield before completing their campaign away at Cheshire with confidence and momentum in need of being restored before the regular season begins.

Plymouth are back in action after last weekend off with a double-header on the road to round out their campaign. Defeats to London Lions and Surrey kept their slim hopes of advancing alive, but the Raiders need to address a poor run of form after losing four of their last five games.

The Royals pose a tough challenge but come off the back of a road game themselves in Bristol, whilst having locked up a top-two spot. That may offer Paul James some encouragement, but whatever happens, they will be keen to finish strong when they head to Surrey less than 24 hours later.

Permutations: Plymouth have to finish above London Lions, having lost the head-to-head with two defeats, so that means winning both of their final games this weekend, and hoping the Lions then falter in their final two games.

Ryan Richards really began to heat up in the second half, finishing with 19 points as Surrey launched a fightback against London City Royals before going down to an eight-point loss on the road. Tayo Ogedengbe top scored with 24 points with his side unable to pull off the upset to leave their qualification hopes on the ropes.

The Scorchers need to win out now to have a chance of making it through and they’re back on the road this weekend as they visit Worcester Wolves having lost by six points when the two teams met at Surrey Sports Park in September. A number of single-digit defeats don’t reflect Surrey’s 1-7 record, but the club may weigh up roster options ahead of the league campaign.

Permutations: Still not eliminated just yet. Two wins from four as a minimum target has now become three wins from their final three with Plymouth and London Lions still to play. They will also need results to go their way to make it in.

It looks as though the Giants will go winless – disregarding the forfeited result – through the group phase of the Cup after they were beaten at home to Newcastle by 28 points. The reverse in the North-East completes their Cup campaign, and they do so without Jonathan Mulmore with the American released this week after failing to live up to his billing as a high-profile summer capture.

Callum Jones produced a solid display to lead his side with Danny Byrne still having to deal with injuries, and will be hoping to get a full roster together by the time the league season starts next month. The Cup may not have been a priority, but the manner of which they have played will not give many confidence of launching a push for the playoffs this season.