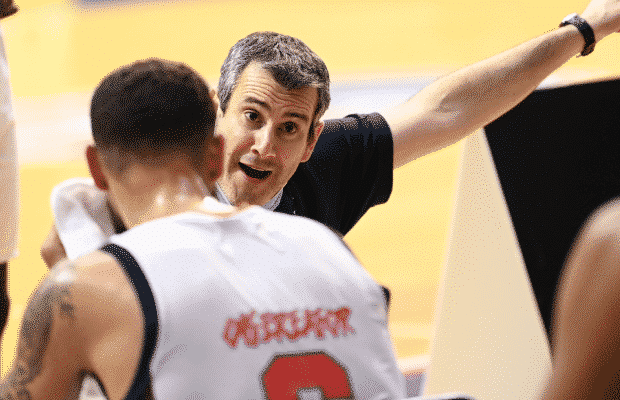 The title race is done, the playoffs matchups are confirmed with the regular season almost complete.

Leicester Riders completed the job in their final league game to be crowned champions for a fifth time, while Bristol Flyers won the three-team battle for the last remaining spot in the post-season.

Champions. The Riders were delayed in their bid to clinch the title by the Lions having fallen to a second successive defeat in midweek, but they bounced back to brush aside Glasgow and Cheshire to win another BBL Championship in style.

They raced out to a 34-13 opening at home to the Rocks on their way to a 26-point victory with Mustpaha Heron putting up 26 points and 10 rebounds, while Ali Fraser added 21 against his former side. Rob Paternostro’s side then wrapped up top spot on the road in a dominant display as captain Darien Nelson-Henry top scored with 19 points before holding the trophy aloft in the post-game celebrations.

10 straight. The title may have been out of their reach, but London prevented their rivals celebrating at the Copper Box and continued their momentum towards the playoffs to take their streak into double figures with two games still to play in their regular season campaign.

Dirk Williams fired in 29 points in the five-point triumph at home to Leicester before top scoring again with 17 points in Glasgow as the Lions were pushed all the way without DeAndre Liggins, Justin Robinson and Kevin Ware. They’ll come up against Cheshire in the post-season as they look to capture the final piece of silverware on offer.

Plymouth hit the 20-win mark in the league as they eased to another South-West derby win over Bristol before overcoming Sheffield in a three-point home win with third place secured with one game still to play in their league campaign.

The Raiders overcame the departures of Prince Ibeh and Denzel Ubiaro with Mike Morsell putting up 23 points against the Flyers with the visitors scoring 64 points in a red-hot first half. Plymouth then held off a fightback from the Sharks with Rickey McGill top scoring with a 19-point haul.

A tale of five-point games for the Eagles this week as they were beaten on the road by Worcester before overcoming Surrey to end their playoff hopes. Newcastle are assured of a fourth-place finish and a testing tie with Sheffield awaits in the playoffs.

Rahmon Fletcher poured in 34 points to go with nine assists in the win over Surrey with Cortez Edwards adding 19-9-8 to flirt with another triple-double as the Eagles bounced back from their 11th league loss, despite having led the Wolves by as many as eight. They close on the road against Bristol.

🔨💥 Cortez Edwards (@Cortez15_) and Justin Gordon (@J_Gore24) combined in an explosive play to get your Eagles on the board.#BritishBasketball #HowayTheEaglesLads pic.twitter.com/xzsegIjMOB

The Sharks had made it three straight wins as they battled back to beat Surrey on the road on Friday night, but couldn’t quite make it a weekend double having suffered a three-point loss away in Plymouth. They still have to face London to conclude their league campaign before facing Newcastle over two legs.

Bennett Koch had one of his best performances with 22 points and 12 boards in the comeback win at Surrey Sports Park with Jeremy Hemsley and Jordan Ratinho both adding 16 points. Three players had 15+ points in defeat against Plymouth as their effort to erase a 13-point deficit came three short.

Worcester did indeed finish on a high and moved into sixth spot as they earned a five-point triumph over Newcastle in their final game. Lamarr Kimble fired in 27 points to lead his side with Jordan Williams coming close with another triple-double of 15 points, nine rebounds and 11 assists.

The Wolves were down six at half-time, but turned things around in the third to take an advantage into the final 10 minutes and they overcame their opponents in a high-scoring encounter. They avoid the top two in the playoffs, but will still expect a tough battle when they take on Plymouth over two legs.

Cheshire split their final two games at home to finish below .500 in the regular season. Ben Thomas’ side started strong in a comfortable win over Glasgow before seeing Leicester win the league on their home floor after suffering a 32-point defeat.

Kahron Ross led the way with 20 points in Thursday’s 16-point victory with the hosts enjoying 26-14 periods in the first and third quarters. It was a contrasting start against the Riders, but it was the visitors with everything to play for and the Phoenix will still feel like they can make some noise in the playoffs – especially based on the form they displayed earlier this year. They’ll face London in the playoffs.

They’re in. With all three teams at 10-18 heading into Sunday’s action, the drama for the final spot looked set to continue, but the Flyers took care of business with a hard-fought two-point win in Manchester to secure the head-to-head – with eighth spot being confirmed a little while later with Surrey beaten.

Down 75-72 inside the final four minutes, Ben Mockford bookended a pivotal 9-0 run with two huge triples and Bristol were able to close out a decisive win. Andreas Kapoulas’ side had lost by 21 against derby rivals Plymouth on Friday, but that would have been quickly forgotten. The league champs await in the playoffs.

The Scorchers had threatened to take the final playoff spot with some big wins in recent months, but it was not enough with two defeats this week coupled with Bristol’s victory over Manchester took them out of contention for the post-season.

Surrey had built a double-digit lead at half-time at home to Sheffield before a second-half fightback from the visitors saw them fall short, despite 21 points from Lacey James. There was a near triple-double from Tony Hicks with 19-8-12 on the road in Newcastle as his side came up short in a must-win encounter – losing by five to signal the end of their playoffs pursuit with one game still remaining.

Not to be for the Giants. They had looked on course for a decisive win over Bristol on Sunday, but fell to defeat down the stretch to see their playoff hopes come to an end. A huge disappointment given the early season showing where Manchester had established themselves amongst the top four.

Jordan Whelan capped a solid campaign with a 26-point effort, while David Ulph posted 11 points and 18 rebounds with the hosts leading by as many as nine in the contest. Lloyd Gardner’s side finish their season at home to the in-form Lions with ninth place the best they can now achieve given the head-to-heads.

The Rocks finish their league campaign with just four wins, though there far worse teams have finished bottom in BBL history. Gareth Murray’s side fell to three defeats to close out the regular season including their final two games coming against the league’s top two.

Glasgow pushed London close in their last action of the season with a 25-15 final quarter to reduce the final margin of defeat to five points with Fraser Malcolm and Isa Brandon netting 16 points apiece. The Rocks had also rallied late against Cheshire, and enjoyed a strong middle period at Leicester, though they were outscored 66-26 in the first and fourth quarters.