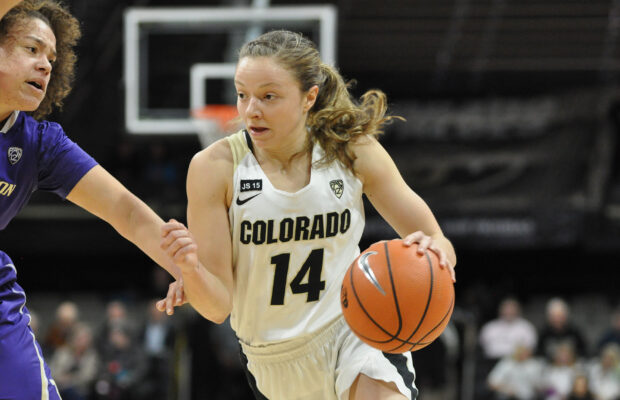 Kennedy Leonard cannot wait to start her career as a pro after signing for German league champions Herner TC for the upcoming season.

The former GB U20 standout penned the deal at the start of the summer having finished her time at Colorado University before earning a call-up to the Senior National team.

And, Leonard is looking forward to making dreams a reality in the top league in Germany with the added bonus of EuroCup Women competition.

“It’s very exciting to be turning professional,” she told Hoopsfix. “It has been a dream of mine since I can remember, it’s definitely been a humbling and surreal experience.”

“I am very excited and blessed to have the opportunity to start my professional career in Germany with Herner TC.

“Not only is the DBBL one of the best leagues in Europe; Herner TC is reigning league and German Cup champions and will be participating in EuroCup this season.

Leonard honed her skills at Colorado with the Texas native making school history for the Buffs as the all-time record holder for most assists. Through 114 games, she handed out 664 assists at 5.8 per game along with 1635 points (14.3ppg), 409 rebounds and 238 steals.

Averaging 30+ minutes in all four years, Leonard started all but two games with career highs of 30 points against Northern Colorado and 13 assists (for a second time) against Miami coming in 2018 during her Senior year.

“I learned an incredible amount over my four years at CU and playing in the PAC 12,” said Leonard, who made the All-Conference First Team on two occasions. “I was given the opportunity to play immediately and compete in the best conference in the United States – this required me to grow up fast as a leader and as a player.

“I learned that you really have to be committed and that you have to love the game to be successful; you have to work harder than anyone else and you have to stretch and challenge yourself.

“I went through a couple of tough seasons, an injury, a coaching change and played with 30 different team-mates in my four years. The most important things I learned were; you have to be coachable, humble and sacrifice everything for the team.

“While we did not achieve everything I hoped we would from a win-loss perspective over my tenure, I know I left CU as a better player and person and I hope I left the programme better than I found it.” Leonard also linked back up with Chema Buceta earlier this summer with the Spanish play-caller also leading the Under-20s in 2016.

The 22-year-old made her Senior debut as part of the preparation for EuroBasket Women before missing out on the final 12 due to FIBA’s ruling on her citizenship status – coinciding with the selection of Karlie Samuelson.

But Leonard – whose Mum was born in Scotland – remains upbeat and is looking forward to more opportunities in the future.

“I really treasure my experience with the U20 team three years ago and loved playing for Coach Chema and GB,” she recalled.

“I had a great experience with the GB Senior team and it was an amazing opportunity to play and workout with not only great players, but players and coaches that are so committed to making GB basketball respected and a force to be reckoned with.

“I look forward to playing with the Senior team in the future.”

Leonard may come up against one or two compatriots in Europe this season with Jo Leedham-Warner, Cheridene Green, Shequila Joseph and Karlie Samuelson set for EuroCup Women action this season.