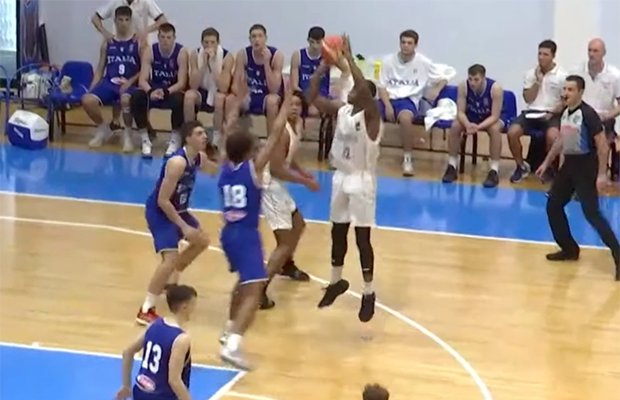 Tomiwa Sulaiman hit the game-winner in the final 30 seconds to help GB Under-18s secure a 61-59 prep victory over Italy, in Greece.

The Hoopsfix All-Star Classic Underclassmen MVP connected with the long-range jumper with 28.2 seconds left on the clock and GB were able to see out the win as they continue to build towards this weekend’s European Championships.

Mate Okros – MVP in the Hoopsfix All-Star Classic Class of 2019 Game – top scored with 14 points including 4 of 7 shooting from 3-point range, while Tosan Evbuomwan added 11 points along with three assists.

Sulaiman also top scored for GB in a heavy 63-103 loss against Spain, while Alan Keane’s side were also beaten 63-91 by the hosts, Greece in the prep tournament opener with a team-high 14 points from Veron Eze.

GB Under-18s open their Division A campaign against Turkey on Saturday before facing Serbia and Germany to complete the group phase in Volos.

Tomiwa Sulaiman (@tomiwa.sulaiman) comes up clutch with the game winner for GB U18s (@gbbasketball) against Italy in a warm-up game yesterday! 🙌🇬🇧🏀#Hoopsfix #BritishBasketball