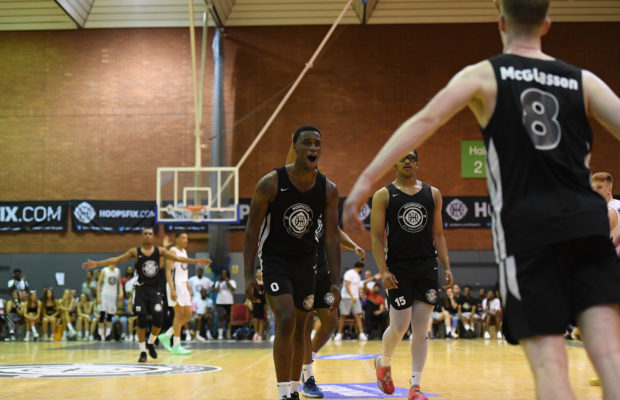 Team Black produced an impressive three-minute spell late in the fourth on their way to a thrilling 90-86 victory over Team White in the Underclassmen game at the 2019 Hoopsfix All-Star Classic in Brixton, on Sunday.

Tomiwa Sulaiman took MVP honours with a 17-point haul, coming up big down the stretch to edge out team-mate Veron Eze, who finished with a joint game-high of 19 points along with seven boards and four assists.

“It feels great to be MVP, it wasn’t in my mindset, I just wanted to play hard and for my team-mates,” said Sulaiman.

“It’s been a dream of mine to play at the Hoopsfix All-Star Classic since I came to watch the event in 2014 so it was amazing to play with great players in a great atmosphere.

“I can take a lot of confidence from today because the reason why I did so well was not my skillset, but my effort so I know going forward I can see results in whatever I do from that.”

Lewis McGlasson – a participant in Saturday’s inaugural 3-point contest – hit some big shots late on to finish with 15 points in the win.

For Team White, Cam Hildreth top scored with 19 points, while Ethan Price had 11 points with minutes spread throughout the rosters.

Eze splashed the first three of the game to put his side up 9-7, but four points from Blaize Sagna would give Team White a 17-21 advantage at the end of the opening period.

Blake Bowman had the play of the game with the one-handed throwdown on the break and Sagna added to the lead after going coast-to-coast for the and-1 to make it 19-28. Tomiwa Sulaiman began to make plays at both ends of the floor to claw Team Black into the contest as they cut the deficit to 39-41 at the interval.

Another even quarter ensued when play resumed with Sulaiman first putting his side back ahead before Hildreth scored seven points in the third as Team White would take a narrow 59-62 advantage into the final period.

The Sussex guard added back-to-back scores as part of an 11-2 run to establish the largest lead of the game at 64-73. Sulaiman helped close the gap once more for Team Black, prior to Eze tying the game at 78-78 with 2:14 remaining. McGlasson hit two big threes out of the timeout to continue the momentum as part of a decisive 16-0 run in little over two minutes.

Hildreth and Jeremy Sochan both hit triples in a quick-fire 8-0 response, but Team Black managed to hold on to secure the victory as McGlasson fired in the dagger from the corner.