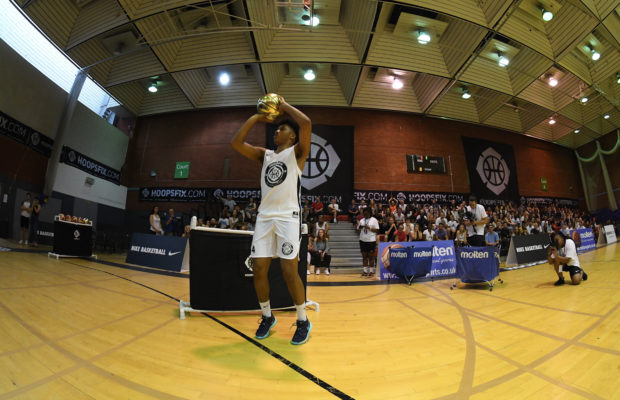 Rhys Sundimalt was crowned the first-ever Hoopsfix All-Star Classic 3-Point Shootout winner after an impressive display in the final, at Brixton Rec, on Saturday afternoon.

The Itchen College guard hit 20 – out of a maximum of 30 – to take the title after surpassing Imogen Cook’s target of 12 in the final.

“It feels great to be the champion,” enthused Sundimalt. “There were a lot of good shooters so to come out on top is great for me.

“I started hitting a lot of shots from the second rack – but it was still a bit of a surprise to see my final score.”

Chris Feeney had set the benchmark in the first round with his score of 15 taking him through in top spot with Lewis McGlasson completing the four-player lineup in the final.

Sundimalt was the last player to go in the first round and jumped into the top four with a score of 13 to climb above the three-way tie between Loren Christie, Macy Spinks and Mate Okros.

The annual dunk contest takes place on Sunday afternoon following the Underclassmen game – in which Sundimalt will compete.

“It gives me a lot of confidence and maybe I can add the MVP trophy to this one,” he added.

“It feels great coming back home playing in front of friends and family and it’s a good chance to try and show out.”