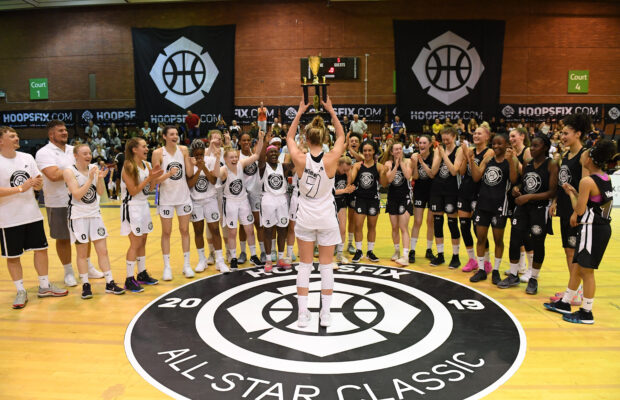 Team White prevailed in the first-ever Under-19 Women’s Game at the 2019 Hoopsfix All-Star Classic as they edged out Team Black 54-50 in Brixton, on Saturday.

Holly Winterburn earned MVP honours with 20 points, four rebounds and four steals in the victory with Loren Christie adding eight points, while Holly Wright had six points and eight boards from the bench.

“It feels great to be MVP,” said Winterburn. “We had a lot of fun out there and it was great playing against team-mates from the last two, three years and going 1 v 1.

“It felt special out there and everyone always remembers the first so was great to be part of it.”

For Team Black, Lauren Saa hit four triples in her team-high 12 points along with seven rebounds, while Jade Mbam scored eight with 38 of their 50 points coming off the bench.

Not team led by more than five points in the contest and the first quarter set the tone with both teams evenly matched. Team Black edged ahead to lead 15-14, but a strong response in the second saw Team White go into the interval with a 22-26 advantage.

The scoring output increased in the third with Team Black re-gaining the lead at 44-42 to set up a tense finale. Neither side were able to seize control, but Team White held their opponents to just three points over the final nine minutes as they put together a 10-1 run.

Shaniya Rose and Christie hit big triples in the spell and Winterburn’s steal and score proved decisive inside the final two minutes to all but wrap up the win.

Nick Drane, Team White head coach added: “This was huge for women’s basketball in this country – not just for these players, but Under-16’s, Under-14’s and Under-12’s who can look up to this and aspire to have this opportunity.

“Both teams played hard and there was a lot of talent on show – it was good to win as nobody ever likes losing.

“Holly is an enormous ambassador for our sport – she has a platform very few have had and she’s a credit to her programme and her family.”

Re-watch the game in full below: