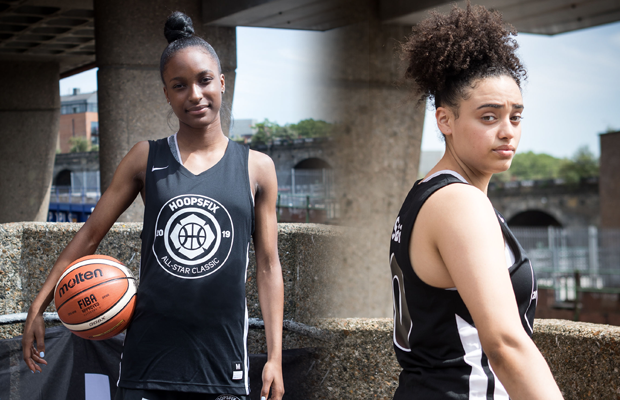 Two months ago, Lauren Saa and Maya Hyacienth were on opposite sides of the court in the WEABL final, but they will be uniting next season as they both head to Rider University.

The Brit duo were both previously part of the England Under-16’s roster at the 2016 FIBA European Championships and recently teamed up at the first-ever Under-19 Women’s game at the 2019 Hoopsfix All-Star Classic.

Saa put up a team-high 12 points along with seven boards in the defeat for Team Black with Hyacienth collecting six rebounds, earlier this month in Brixton.

“The whole experience was amazing,” recalls Saa. “It was a great honour to be selected to play in the first ever women’s Hoopsfix game and it was a great way to promote the sport for women.

“Having the chance to play with the best players of my class was so cool and unusual as most of us are usually rivals during the season. It was a fun experience as we only had a few plays so we all got to play our style of game which made the experience fun for everyone.”

Hyacienth added: “I felt honoured to be recognised as one of the best in the UK and to play against, and along with some of the best was an experience to remember.”

Saa had missed half of the 2018-19 season due to a knee injury that required surgery, but battled through the setback to play a part in Charnwood’s WEABL Championship triumph as they prevailed against a CoLA side featuring Hyacienth and five other HASC participants.

And, it is the same re-assuring feel from their schools that played a factor in the decision for both players.

“Just like my visit at CoLA, I felt comfortable and welcomed,” stated Hyacienth. “I’m really excited to fly out and start another chapter in life. Rider is a small school and I liked the community based vibe and focus on the academics.

“I feel like I can bring defensive intensity and fast pace and going into Rider, I want to work on stretching the floor.” Meanwhile, Saa explained: “I am extremely excited to go to Rider. I can’t wait to meet new people, play at a different level and be somewhere completely new.

“The deciding factor in choosing them was the family vibe I got from my visit and I feel like I have something valuable to add to the team which can hopefully help next season.

“I think I can bring great energy on and off the court. I love to shoot the ball and I think this is a big thing I can bring.

“Having the opportunity to play at a good Division I school is going to be tough, however I believe that working with my new team-mates and coaching staff we can achieve great things.” And the duo will be able to help each other through the new experience as they embark on an exciting journey as freshman later this summer.

“Having Maya part of this experience will help me a lot,” said Saa. “I think having someone from home will help me when trying to settle in because will already know someone who I can be myself around.

“We both are used to living away from home but America is a different level so having someone that we know will make us feel more comfortable and at ease.”

Hyacienth echoed those sentiments, adding: “We’ve had the opportunity to play in the U16 European Championships together so we’ve been able to create a bond beforehand. I think it’s good that we both have each other to relate to and I can’t wait for our journey to start.”

GB Senior Men guards Justin Robinson and Teddy Okereafor are both part of the school’s alumni.