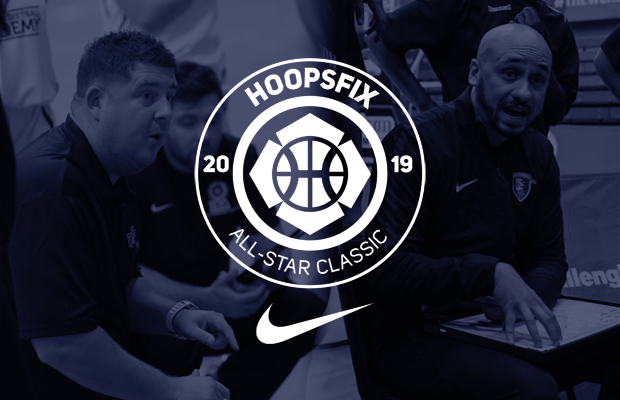 Nick Drane and Jackson Gibbons have been selected to coach in the inaugural Hoopsfix All-Star Classic Under-19 Women’s game on Saturday June 1st in Brixton (buy tickets now!).

With countless titles between them at both junior and senior levels, the selection of Copleston/Ipswich’s Drane and CoLA/Southwark Pride’s Gibbons is not just about their programmes’ success in the win columns, but more recognition of their ethos of doing it by developing local grassroots British talent, having both shared their stories on the Hoopsfix Podcast this season.

Gibbons will head up Team Black, whilst Drane will take the reins of Team White in the game (full rosters here), that tips off at 4pm on Saturday June 1st featuring numerous top young prospects in the country.

“I’m really flattered to have been asked to coach at this event, especially as this is the first ever women’s game at the Hoopsfix All Star Classic,” Drane said.

“There are so many coaches that deserve to be here so to be asked is a real privilege and something I hope I do justice.

“However, this game is not about me or any of the other coaches. This is 100% about the players and the opportunity for them to showcase their talent and ability.

“The addition of a women’s game to this great event is a massive step for our sport and for women’s basketball and we are fortunate to have such a talented crop of players on both teams who I am sure will see this is an opportunity to not only showcase their own skills, but inspire younger generations to keep working on their game in the hope to be involved in the future!”

Both coaches have players from their programmes competing in the game.

“My very first thought when Hoopsfix announced the game was, finally, finally the best girls in the country will be showcased together all on one court, I think it will be great for the fans and huge credit to Hoopsfix for taking this positive step.

“I’m supposed to be taking two months off from coaching after a long hard season but when Sam asked me if I’d coach, the chance to be a part of something special like this was too much to resist. The game will be all about the girls and that’s how it should be as they’ve all worked so hard to earn the right to be on such a great stage.”