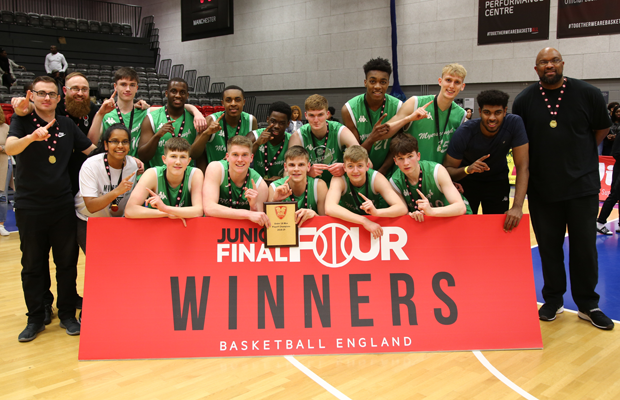 Myerscough avenged last season’s defeat in the U18 Men’s Playoff Final, to claim a 52-50 win over Haringey Hawks on Sunday at the NBPC in Manchester.

Leading 44-36 going into the final period, Myerscough were enjoying their biggest lead of the contest before having to hold off Haringey down the stretch.

Lewis McGlasson was selected as the game MVP as he enjoyed a team-high 16 points in a game where none of his team mates made it into double digits.

“We were just trying to calm everybody down [at the end of the game],” McGlasson said. “Execute some plays for the stretch to win the game. That’s what we did.”

“Sometimes you just gotta win ugly. We had a game plan coming in and we knew if we stuck to what we said it’d make things difficult for Haringey and put us in a position to compete. The guys saw it through, and in games like today you just have to find a way.”

In a low scoring, defensive battle, a 6-0 Haringey run to start the fourth almost put the teams back on level terms. All three baskets were scored by Ndwedo Newbury (21 points, 15 rebounds) as he was beginning to heat up.

Bradley Kaboza (8 points, 5 rebounds) scored 3 of his points in the final frame and his timely baskets coupled with Mate Okros’ (6 points, 7 rebounds, 4 assists) efforts kept Myerscough in touch and Okros would be at the centre of one of the game’s biggest moments.

With Myerscough up by 2 with 12 seconds remaining, Haringey’s Alex Distras lost the ball and Okros recovered it. Jubilant at the turnover, Okros took off and was immediately called for a travel, handing the ball back to the Hawks.

Elation turned to despair as the London club still had one more shot at a win, but a three-point attempt by Owen Young was blocked from behind by Myerscough’s Callan Low, securing the win and sending the U18 Playoff title to the North West.