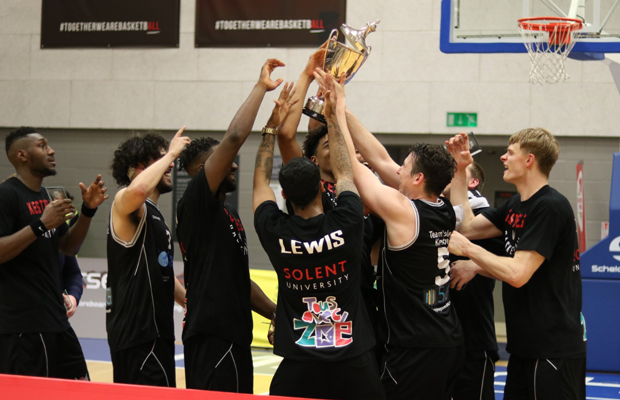 Solent Kestrels made it a double, claiming the 2019 Division 1 Men’s Playoff title with a 100-81 win over Worthing Thunder on Sunday afternoon at the NBPC in Manchester.

They add the playoff title to their regular season title, as Travis Charles picked up MVP honours with 25 points and 10 rebounds on 10-of-16 shooting, Herm Senor II had 22 points, 8 rebounds and 12 assists, whilst Elliott Dadds had 19 points for Solent.

“All the hard work that we put in, from the players, the coaches, the people, I gotta thank God for this opportunity,” Charles said. “It jut feels good. It’s not just me, yeah I got MVP from one performance, but it was really a team effort.”

Meanwhile, Solent Head Coach Matt Guymon is looking ahead to the future.

“For us we want to keep getting bigger and better,” he said said. “The Division 1 Men is a fraction of what we do. We’re moving into a brand new facility next year, so we really wanna grow our community with the Division 1 team in there, but also for the whole club, for it to become a hub as a pathway for players in our region.”

With neither team being able to gain an edge, a 9-0 run from Solent just before the half gave them a six point advantage, that soon ballooned to double digits in the third. Zaire Taylor sparked Worthing in the fourth, reeling off 12 straight point and pulling to within 4 but it was as close as they would get the rest of the way.

Worthing were led by 20 points, 8 rebounds and 10 assists from Jorge Ebanks, another 20 and 10 rebounds from Zaire Taylor, and 17 from Brendan Okoronkwo.