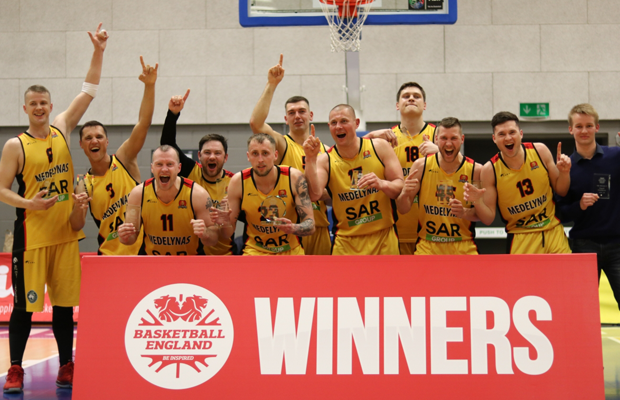 It proved third time lucky for London BC Medelynas as they secured an 80-66 win over Team Solent Kestrels II on Sunday at the NBPC in Manchester.

Having lost the National Shield Final and last season’s Division 4 Playoff Final, BC Medelynas came through for the Division 3 Playoff title behind a 17 points, 6 rebounds, and 7 steals from MVP Mantas Guzys.

“This has been a very big journey for us as a team, especially this year after losing the D4 Final last season, we’re delighted to be champions finally,” London BC Medelynas Coach Andrej Golovin commented.

“We had a psychological thing in our head, losing two Finals in a row. We were coming here as the main team to win and I think that brings pressure. We played a really hard first two quarters and from there we cracked on, relaxed, the pressure was gone and we never stopped.”

Algirdas Jaras had 18 points and 11 rebounds for Medelynas and Donatas Juodeikis had 9 points and 6 assists.

Ben Maranan had 18 points, 12 of which came in the third quarter to lead Solent, Alex Grant had 13 points and 14 rebounds whilst Matt Davis had 11.

“We had a game plan, we knew we were relying a lot on our shooting ability and today they didn’t really go in, or go in at the right times.

“We made some at the end to get it back to 10 points, but it was too late. Medelynas are very physical and we knew we’d struggle to control the paint, and we did struggle and rotate and they have so many weapons offensively.”