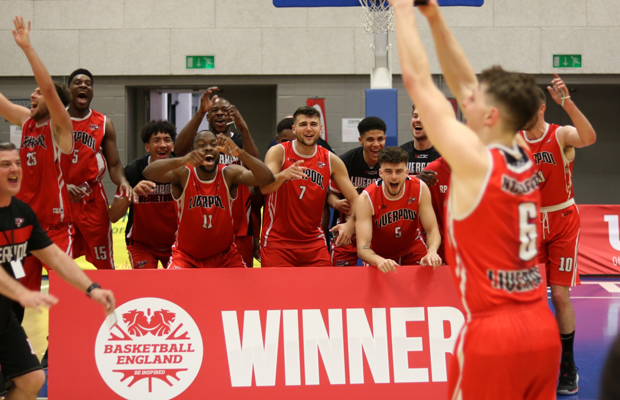 Liverpool completed a 23-0 season with an 82-74 win over Westminster Warriors to claim the 2019 NBL Division 2 Playoffs title.

It was anything but easy, as Westminster proved worth opponents, taking it down to the wire in a game that saw both teams holding double-digit leads at different points.

Jack Hudson picked up MVP on his way to 16 points, 8 rebounds and 8 assists, Mark Rangeley led Liverpool in scoring with a 23 point outing, whilst David Ulph added 15 points.

“Unbelievable game,” Liverpool Coach Delme Herriman exclaimed. “I think everyone was expecting a great game from the top two sides in the league but when we were up by so many points in the 3rd quarter and they made a really good run and went ahead, we just needed to calm down and get some stops.

“It was a hard season, trying to keep on top of the guys to make sure we didn’t drop a game. It was just keeping players focused and pushing them to be the best, not just winning the league but winning the playoffs as well.”

Westminster were led by John J Johnson’s 21 points, with Justin Hitchman and Johnathan Lashley adding 16 apiece, the latter having a double-double with 11 rebounds.

With Westminster leading by three in the early stages of the fourth, a Mark Rangeley triple tied the game up before he knocked down another to take the lead for Liverpool. It was the beginning of a 9-0 run that gave Liverpool the lead they would not relinquish the rest of the way.

“It was a tough game. It went back and forth, close. To be honest, it wasn’t the game that we expected. But we did know Liverpool would be worthy opposition. In the end, when it came down to the clutch, they made their shots and sadly we didn’t.”