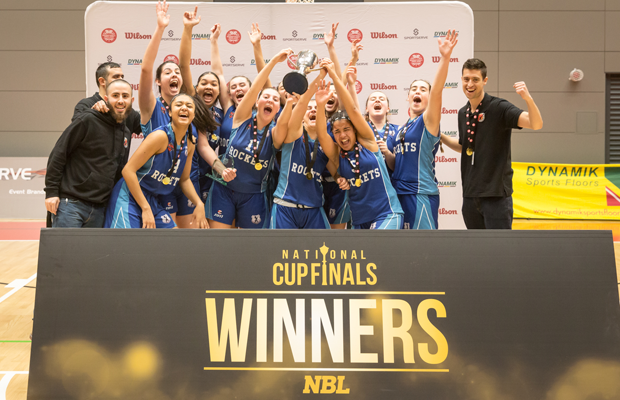 Reading Rockets Academy held off a late rally from Charnwood to claim the 2019 Under-18 Women’s National Cup, with a 65-60 victory on Saturday afternoon at Essex Sport Arena.

“It feels strange” Latore Cria said on winning MVP. “This is my first year in England and I didn’t know I could do this, I’ve improved a lot. My team helped me to be the MVP and so this is for all of us. Now we want to win the league.”

“We are really happy because we trusted in ourselves,” Reading Head Coach Vincent Blai Benlloch said.

“We had 100% confidence in ourselves, we said before the game we didn’t want to have any regrets, and so we’re really happy, the girls deserve it.”

Reading had led by as many as 25 after dominating the early phases of the game, and with an 11 point lead heading into the final 4:45 they were still looking comfortable, however, Charnwood, led by Holly Wright who had 6 points in the burst, pulled it back to within 3 with 16 seconds remaining.

But Wright would miss two free throws with an opportunity to pull them within one, and Noa Sanchez Marques converted on a lay up for the final nail in the coffin.

Imogen Cook led Charnwood with 12 points and 7 rebounds but was held to 3-of-15 shooting, Hannah Dawson had 11 and both Holly Davies and Holly Wright finished with 10 each.

“If we play how we played in the second half, throughout the whole game, I think it’s a different game,” Charnwood Head Coach Krumesh Patel said.

“We started off slow, made too many mistakes, let them get easy scores and the lead. In the second half we said we need to make them work for stuff to have a chance and that’s what we did.