Haringey Hawks Hold on for U18 National Cup Title in Thriller Over Reading - Hoopsfix.com 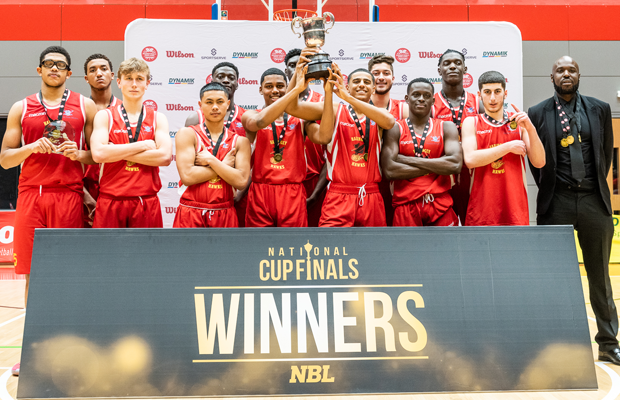 Haringey Hawks held on for a thrilling 73-71 victory over Reading Rockets to claim the 2019 Under-18 National Cup title on Saturday afternoon at Essex Sport Arena.

Franklin Agu picked up MVP honours, finishing with 26 points, 17 rebounds, 3 assists and 4 steals, as Haringey Hawks prevailed despite giving Reading multiple opportunities by not sealing the game at the free throw line.

“It feels amazing, we’ve come a long way,” Agu said. “We’re undefeated and want to go the whole season undefeated. I always knew we had it (the win), we’ve always come into these tough games prepared. Our fans were amazing, they were loud and motivated us as a team.”

Alex Distras had 13 points and 5 assists, Lesley Smith had 11 points and Mo Sanni-Oba joined them in double figures with 10. Ndwedo Newbury had 14 rebounds to go with his 9 points.

“It feels great and well deserved,” Hawks Head Coach Franck Batimba commented. “Credit has to go to Reading in what was a really great game. Yes and no, I believed we were going to win for the whole game but we made it hard for ourselves, too many turnovers, they played great, they’re a good team.”

Haringey went 2-of-8 at the free throw line in the final 40 seconds, but Reading missed their own potential opportunity at the line to force overtime with six seconds remaining.

After Sam Grant knocked down a three pointer to pull Reading back to within one, 72-71 with 13 seconds remaining, Hawks coach Batimba was ejected with his second technical after going onto the floor following one of his players going down. Grant missed the ensuing potential game-tying free throw with 6 seconds remaining, being forced to foul on the next possession where Alex Distras split a pair for the final margin.

Grant’s running three pointer at the buzzer would not go down, as Hawks’ fans stormed the court in jubilation.

Sam Grant had 24 points and 8 rebounds, but was held to 10-of-29 shooting, Ross Stepney had 17 points and 16 rebounds, whilst David Chive flirted with a triple double on his way to 10 points, 8 rebounds and 8 assists.