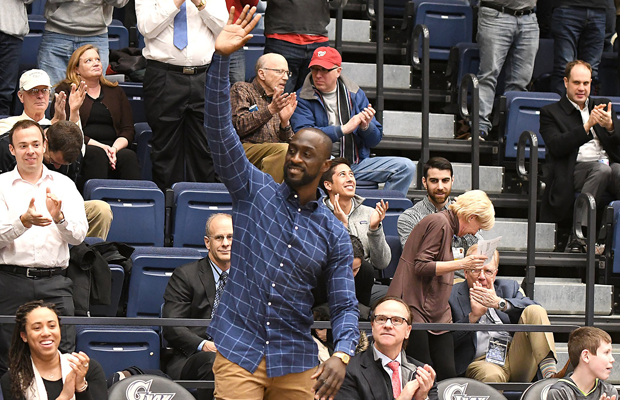 The GB Olympian, who retired from playing in 2015, is now the General Manager of Washington Wizards’ G League Affiliate, Capital City Go-Go, and was in attendance of GW’s game against Dayton on Thursday night, where the school paid tribute.

He took the college basketball world by storm, captivating our campus and the nation. Tomorrow night we salute you, @Pops.

Mensah-Bonsu played 112 games (71 starts) from 2002-2006 while averaging 11.7 points, 6.0 rebounds, and 1.3 blocks in 23.8 minutes per game in his four year career. He was named Atlantic 10 Most Improved PLayer in his sophomore season, All-Atlantic 10 second team as a junior, and All-Atlantic 10 first team and All-Defensive team in his Senior Year. He helped the school to some of their most successful seasons in program history, including a 26-1 season where they were ranked in the national top 10 for the first time in 50 years.

“It’s kinda hard to put into words,” Pops said reflecting on his time at George Washington. “It’s surreal when you go back and think about all the great times we had here when I was playing at GW. The good and the bad times, everything coming full circle with tonight, getting the opportunity to come back and give back to the GW community.

“My time here was amazing, the fans here embraced me, I feel like they made me who I am, they moulded me as a man, I was able to take every experience I had at GW and like I said, it moulded me into the man I am today, and I used it to the best of my ability.”

And on being honoured by the school, he said:

“It’s humbling. Whenever you’re recognised in this regard, it shows that the school, the community, the fans, appreciated your time here. Obviously, it’s an individual accolade but there was a team of guys, coaches, staff, that allowed me to be great whilst I was here.

“I can never attest anything I do as an individual success; it’s all due to the coaching ,all due to the teammates that I had around me that allowed me to grow as a man. I just appreciated my time here at GW.”

Thanks to @notthefakeSVP for being a part of @Pops’ special night here in Smith Center! pic.twitter.com/232hvc0kWl