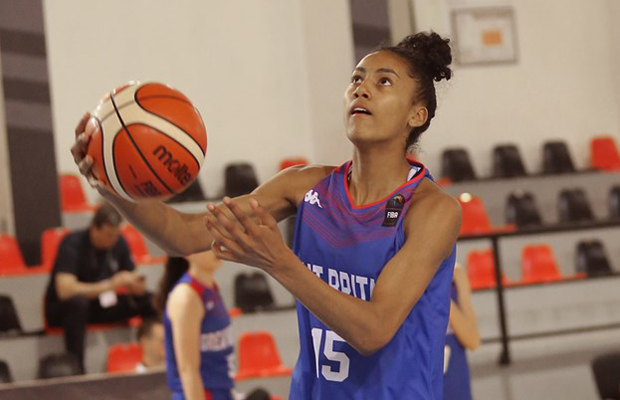 Great Britain has revealed a 16-player training camp ahead of next month’s Division B FIBA U16 Women’s European Championship in Podgorica, Montenegro.

Jade Guidolin-Duncan (pictured above), Pollyanna Storie, and Rebecca Harwood-Bellis are the three returners to the team from last summer’s group.

Head Coach Kenrick Liburd is again in charge of the group, with support from Syracuse Assistant Coach Adeniyi Amadou, as well as physiotherapist Chedell Cruickshank and team manager Jo Holmes.

“Really excited for the opportunity to lead this group,” Liburd said. “I feel that we have the versatility and quality to be competitive in this years tournament.

“The goal must be to use our preparation time well, ensuring that we get better every day.”

Training camp opens on Sunday in Manchester, before three prep games and then the opening game in Podgorica comes against Macedonia on Thursday 16th August.

Every competitive game of their campaign will be streamed on British Basketball’s Facebook page and on FIBA’s YouTube page.