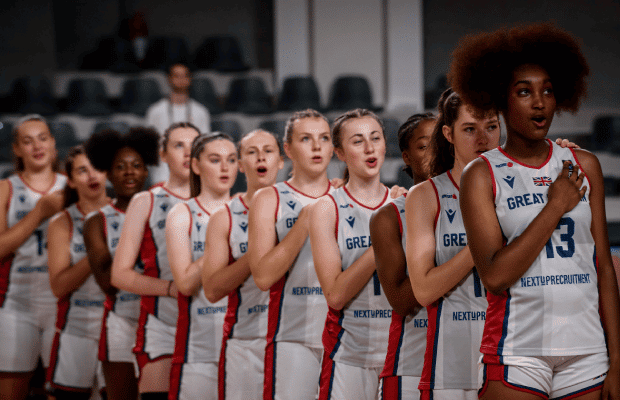 Great Britain’s Under-16s missed out on the quarter-finals of the FIBA U16 Women’s European Championship, Division B after finishing with a 1-3 record in the group phase in Podgorica, Montenegro.

Donnie Macdonald’s side took third place in Group D as their promotion hopes were dashed in a heartbreaking defeat to Luxembourg in their penultimate game.

Here’s a recap of their games in the tournament so far:

GB’s opening game was a learning curve as they were outplayed across two quarters by Slovakia in a 47-83 defeat.

They were only down three after 10 minutes, but were outscored 23-6 in the second period before a 21-5 final quarter saw Slovakia race to a 36-point victory.

Felicia Jacobs-Abiola was the only GB player in double figures with 15 points to go with eight rebounds in the loss.

GB had also been competitive in a 19-19 third quarter as Jacobs-Abiola scored eight points in the period.

GB bounced back in style with their first win on Friday night as they came back from 14 points down to beat Romania 65-62.

Jacobs-Abiola again top scored with 14 points along with nine rebounds, while Katie Cox and Irene Oboavwoduo both added 13 points apiece.

GB had got off to a slow start and found themselves trailing by 10 points at 43-33 at half-time. They were then 12 points behind with 3:40 remaining in the third, but were able to half the deficit by the end of the quarter.

Romania were nine points ahead early in the fourth before Alex McIntosh hit back-to-back triples to start a 12-0 run that pushed GB into the lead – spanning almost seven minutes.

Jacobs Abiola’s driving score made it a three-point game with 1:13 left and GB held on to spark jubilant scenes at the buzzer.

GB returned to action two days later, but were on the receiving end of a fourth quarter fightback this time as they were beaten 62-64 by Luxembourg in the final seconds.

In contrast to their celebrations on Friday, GB were despondent as they saw their opponents knock down a mid-range jumper at the buzzer to snatch the win.

GB were down seven on two occasions in the first half before a 10-0 run put them 35-29 ahead at the break. The gap hit double figures in the third with GB leading 49-42 with 10 minutes remaining.

However, Luxembourg fought back and surged ahead with a 7-0 burst down the stretch before GB managed to level in the final minute. They had to chance to take the lead, but as time began to expire Luxembourg had one final chance and they took it.

Jacobs-Abiola finished with a double-double of 15 points and 12 rebounds with Oboavwoduo adding 11 points, while Megan Verbeeten and Maisie Keyes both had nine points.

GB’s top two hopes were officially ended before taking to the court and they bowed out from the group with a 61-63 loss against unbeaten group winners, Austria.

Cox led a fourth quarter fightback to finish with 17 points, 10 rebounds, six assists, four steals and a block as GB outscored their opponents 24-8 in the final 10 minutes.

Austria had made their move through the middle periods, outscoring GB 22-10 in the second and 16-9 in the third to leave GB with too much to do having been as many as 21 points behind.

GB trailed 63-42 with 4:39 remaining before producing a rallying 19-0 run that included a trio of triples from Cox as well as outside efforts from Zoe Sharpe and Oboavwoduo before running out of time.

GB Under-16s continue their tournament in the 9-16 Classification Round and take on Ukraine in their next game on Thursday.