Brian Amabilino-Perez Takes Over to Claim MVP in Class of 2018 Game - Hoopsfix.com 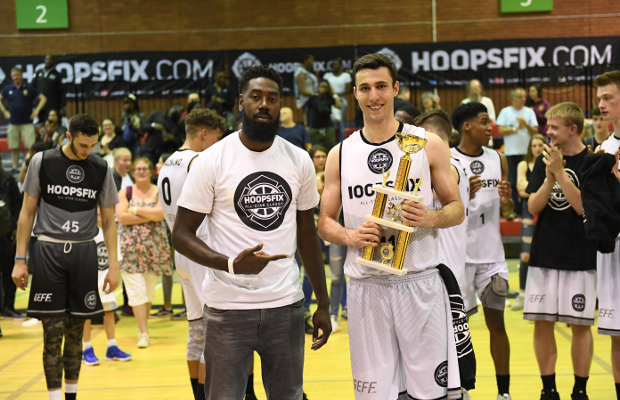 Brian Amabilino-Perez scored 11 of his game-high 20 points in the fourth quarter and had two highlight plays in the Class of 2018 Game in Brixton, on Saturday.

The GB Under-18 forward produced a double-double by adding 10 rebounds to help Team White secure an 85-88 victory over Team Black in the fourth edition of the Hoopsfix All-Star Classic.

“I didn’t expect to be MVP, but it was a great feeling,” declared Amabilino-Perez – who also featured in the event in 2016.

“It was a really great event and it was good to see all of the British basketball talent coming together.

“The game was awesome with a really great atmosphere so it was a pleasure to play in.

“It was nice for me, also, to see a lot of friends again after a year away and it was a lot of fun.”

Amabilino-Perez netted an important three to put his side up six ahead of the final two minutes, but it was two plays earlier in the final period that got the crowd off their feet in Brixton.

Brian Amabilino-Perez with a couple of big time dunks on his way to #HASC18 Class of 2018 Game MVP! 🔥🔥🔥 pic.twitter.com/pYzn0le7R0

“The first we ran a play and I ended up driving baseline, getting up and dunking it.

“Right after I got blocked so I had to get him back, came down the court and went at it.”

Check out highlights of Amabilino-Perez’ performance amongst the best of the action at the 2018 Hoopsfix All-Star Classic on FreeSports TV, on Tuesday night at 9pm.